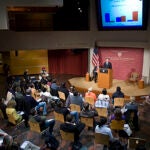 Standing at center-right in America

What has made Walmart the world’s largest corporation? According to scholar Bethany Moreton, the reason largely is a strong religious base.

Moreton, author of “To Serve God and Wal-Mart: The Making of Christian Free Enterprise” (Harvard University Press, 2009), was on campus Tuesday (Nov. 17) to explore the ideological foundation behind the company’s corporate ethos, one that she said has successfully fueled the megacorporation’s bottom line.

She appeared at Harvard Divinity School as part of its Business Across Religious Traditions colloquium series.

The connection, she said, is largely the product of Walmart founder Sam Walton, who started the discount retail chain in Arkansas in 1962, and gradually tapped into the strong fundamentalist Christian culture across the Sun Belt.

Moreton, assistant professor of history and women’s studies at the University of Georgia, said Walton worked into the company’s corporate structure the notion of “service leadership” that ties worker roles into the concept that “Christ was a servant leader,” and emphasizes the importance in Christian tradition of serving others.

With this vision, said Moreton, men at the company “earned their power through their superior ability to serve,” while women had “an enthusiastic audience for labor that was formally considered unskilled.”

Even an ongoing sex-discrimination case against Walmart illustrated the strong religious connection many of its employees associate with the company. Many of the plaintiffs in Dukes v. Walmart Stores Inc., a class-action discrimination suit filed in 2000 that alleged that the firm offered women fewer promotions and lower pay than men, admitted to an initial strong attraction to Walmart’s “values.”

According to Moreton, citing a story on the suit that appeared in The Nation, the plaintiffs’ “original enthusiasm for their jobs had much to do with Walmart’s reputation as a pro-family, Christian company.”

Another critical element of Walmart’s success, she said, was Walmart’s savvy ability to connect into the underlying social structure of Christian families.

In the 1980s, during regular business meetings with Walmart managers and their spouses, Walmart’s director of family living spoke on the changed relationships between husbands and wives, which were, Moreton noted, “fundamental to the company’s business model.”

Meeting attendees were told, “Men should start expressing their appreciation to their overburdened wives. After all, hadn’t they been motivated this very weekend by Sam Walton’s thanks for their own hard work at Walmart? Did they in turn show that appreciation to their wives? Did they show it to the women working in the stores?”

The message, Moreton said, picked up on the notion of the Christian model of “headship” and submission in Christian marriage with a similar one developing in secular management texts. It then married them “within a service workplace.”