Standing at center-right in America 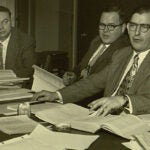 Norman B. “Norm” Coleman Jr., the former Republican U.S. senator from Minnesota, delivered a clear message to a Harvard audience last night (Nov. 17), saying that “America is a center-right nation today, as it has been for generations.”

That “simple truth,” as he called it, has strong political implications. Power in the future — “a lasting majority,” said Coleman — will go to whichever party stakes “a legitimate claim to independents [and] welcomes its center-right people along with its most hard-core members.”

Republicans and Democrats alike have hard-core elements in the far left and right, Coleman told the crowd at the John F. Kennedy Jr. Forum. But it is important to be welcoming to moderates, to the practical, reformist core that has guided American politics since Abraham Lincoln.

Coleman, who served in the U.S. Senate from 2003-09, acknowledged that Republicans have sometimes failed to welcome youth, women, Hispanics, and gays. “We have to do a better job of reaching out … if we expect to be a majority party,” he said. Failing that, added Coleman, Republicans could one day find themselves “a regional party” sequestered in limited geographic strongholds.

In particular, the Republican Party should be attractive to college-age voters, who seem so “in control of their lives” and attracted to individual initiative, he said. “The philosophy of conservatives really is more in line with the reality of your generation. I just don’t think we’ve done a good job of articulating it.”

One year into the Obama era, political shifts may be under way. Coleman parsed the recent Virginia and New Jersey gubernatorial races, both close contests that went to the Republican candidates who attracted independent swing votes. He added that recent national polls show for the first time in 12 years that people believe government is “doing too much.”

The former senator and onetime mayor of St. Paul, Minn., is a fellow this week (Nov. 16-20) at the Institute of Politics (IOP), which sponsored the event. IOP Director Bill Purcell — himself a former mayor of Nashville  —described his colleague as “a voice of moderation with a pragmatic approach to problem-solving.”

In running a city, “you learn to be responsive,” said Coleman, right down to taking calls about snow plowing. He described his city hall experience as gritty and valuable, even though it occupies “the bottom of the political food chain.”

Coleman’s St. Paul tenure demonstrates his political journey. He was first elected mayor as a Democrat in 1994, and the second time as a Republican in 1998.

Coleman, a onetime anti-war activist at Hofstra University on Long Island, earlier attended James Madison High School in Brooklyn. Some of its famous graduates are on the political left, including U.S. Sen. Charles Schumer (D-N.Y.) and Supreme Court Associate Justice Ruth Bader Ginsburg. Coleman joked that he “never met a Republican until I went to college. There weren’t any.”

But in the 1990s, as a former state prosecutor struggling to revive St. Paul as mayor, Coleman discovered that his business-oriented, reformist urges were better expressed in the Republican Party. He went from being Democrat Bill Clinton’s state campaign representative in 1996 to Republican George W. Bush’s in 2000.

After what Coleman described as “six turbulent years” in the Senate, his thesis — that the United States is at its core a center-right nation — came into greater focus. He enumerated the main points of that thesis to an audience that interrupted him with occasional bursts of applause.

Health care reform is a good example, he said. There is broad national consensus to bring costs into line and to maintain quality, but reform has to have practical meaning, said Coleman. “Folks in center-right America want reform, but they want it to work.” Meanwhile, he said, the same people, who he said tend to be modest and frugal, want to see their tax dollars spent with care.

The center-right core also has a vision of economic prosperity driven by innovation and individual effort, not by government intervention, said Coleman. “They embrace an entrepreneurial spirit rather than a collectivist vision.”

For dramatic effect, he recited a list of addresses: all garages where big companies started small, including Disney, Ford, and Hewlett Packard.

That same center-right core “trusts markets that usually work, over government regulation that occasionally does,” Coleman said, and it measures progress in job creation.

Beyond economics, the core center-right believes that the American judiciary is meant to interpret laws, said Coleman, “not use its power to make social changes that legislatures are unwilling to do.”

Yes, social issues generate the most heated public debates, he said, including cultural turbulence over gay marriage, abortion, and the right to bear arms.

But even within this national clash over values, consensus is possible and necessary, if the United States is to maintain its national security. Coleman quoted onetime Vice President Hubert Humphrey, who described politics as “the art of the possible.” And he praised the late U.S. Sen. Edward Kennedy, whose senatorial skills involved friendship and “finding common ground.”

On foreign policy, center-right beliefs maintain that “we are exceptional in the world” and that Americans “use strength as the path to peace,” said Coleman, though they harbor no illusions of perfection.

That sense of being exceptional includes a sense of American national pride and dignity, one that is offended to see a president bow to “the emperor of Japan or the king of Saudi Arabia,” said Coleman. “Courtesy is one thing, but we don’t willingly surrender, even symbolically, [to the idea] that they are better than us.”

Coleman’s sense of the nation’s place in the world was unapologetic. “We still believe Lincoln’s words,” said Coleman of the center-right, “that America is ‘the last best hope of Earth,’ and I think our leaders should behave accordingly.”

The Senate is a place where friendship is possible, he said, but where consensus and action are often difficult.

Coleman gave an example, citing a bipartisan attempt he was part of to reduce U.S. dependence on foreign oil, and to give nations like Iran and Venezuela “less bark and less bite.” What has to be done is clear, he said. America needs more conservation, more renewable energy, more environmentally safe energy exploration, and more nuclear power.

It’s also a time for new Lincolns, he said. Coleman called the 16th president “the hero of the center-right” for refusing to embrace political expediency in favor of “enduring values.”

Lincoln had one other quality shared by the enduring core of the center-right, said Coleman. “He dreamed great dreams.”