A bell tolls for bravery 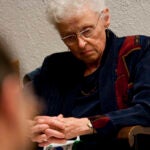 Intersection of climate change and Christianity

The Memorial Church at Harvard University was crowded on Veterans Day with well-wishers, many of them in uniform. The guests, including one talkative baby, witnessed the stately and solemn unveiling of a stone plaque to the University’s Medal of Honor winners.

Harvard claims 16 recipients of the medal, the highest U.S. military decoration for bravery. The plaque was a gift from the Harvard Veterans Alumni Organization. According to the group, more than 1,200 Harvard graduates have lost their lives during wartime military service.

Nov. 11 marked 91 years to the day since the close of World War I, the “war to end all wars,” even though many more conflicts have roiled the world since then.

Introducing the guests was Paul E. Mawn ’63, a retired Navy captain and chairman of Advocates for Harvard ROTC, who researched Harvard’s medal recipients. They “bore the price of freedom,” he said, “which is not free.”

The guest of honor was Gen. George W. Casey Jr., chief of staff of the U.S. Army. His father’s name, Gen. George William Casey ’45, appears on a bronze plaque on the north wall of the Memorial Church, honoring Harvard graduates who died in Vietnam.

He praised a “new generation of heroes,” represented by Sgt. 1st Class Jared C. Monti, a Massachusetts-born infantryman killed in 2006 in Afghanistan while trying to save a wounded friend. He was awarded the Medal of Honor posthumously.

Harvard President Drew Faust joined Casey in unveiling the Medal of Honor plaque, mounted on the wall just to the left of the church pulpit.

Faust is the daughter of McGhee Tyson Gilpin, who as a World War II U.S. Army intelligence officer was wounded in 1944 and awarded the Silver Star for valor.

She called the Harvard men being honored “the finest exemplars” of graduates through the years, who from the Revolution on have served their country. Their brave deeds “remind us of the meaning of character, of devotion, of moral as well as military achievement,” said Faust. “We at Harvard are proud to have been a part of the lives of these remarkable Americans.”

As current and future students pass through Harvard’s gates in search of wisdom, she said, “Let us work to ensure that we impart not just the wisdom of the mind but also the wisdom of the heart — the courage, character, and that profound sense of obligation to service and citizenship so powerfully represented by the men we honor today.”

The Rev. Peter J. Gomes, the Plummer Professor of Christian Morals and Pusey Minister in the Memorial Church, called for “a moment of silence, deep silence,” while the church bell tolled sonorously.

The bell was the gift of A. Lawrence Lowell, president of Harvard when the church was dedicated on Armistice Day in 1932. The bell’s inscription reads that it “should forever ring in memory of voices that are hushed.”