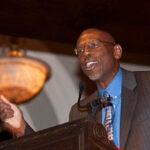 Lecturer says the need is great, but training lacking

That astonishing disparity prompted Esther Mwaikambo, this year’s Harvard Distinguished Africa Lecturer, to address the topic head-on. Mwaikambo is a physician and professor of pediatrics and child health at the Hubert Kairuki Memorial University, a teaching hospital that she helped to found in Dar es Salaam, Tanzania’s principal commercial center and de-facto government seat.

Appearing at the Center for International Studies Oct. 20, Mwaikambo  discussed “Doctors for Africa: The Challenges of Establishing a Medical University in a Resource-Poor Country Like Tanzania.” The needs are great in a country where the gross national income is $660 per capita, and where almost two-thirds of the population lives below the poverty line, defined as earning less than $1 a day.

“It is a grim picture indeed,” Mwaikambo said after citing those and similar statistics, “but probably not all is lost.”

Tanzania is hardly unique among African countries in its shortage of medical schools. According to a 2004 paper by Amy Hagopian, of the University of Washington’s School of Public Health, there were only 87 medical schools in the 47 nations of sub-Saharan Africa; 11 of those countries had no medical school, and 24 had only one each. Many physicians who do graduate from African medical schools end up leaving the continent to seek higher-paying, less-frustrating jobs in the West.

The area’s shortage of doctors — along with nurses and other health care personnel — contributes to the dearth of quality health care for the region’s 800 million people.  In addition, sub-Saharan Africa has high infant and maternal mortality and morbidity rates, rampant HIV, and higher rates of developmental disorders and preventable diseases, such as malaria and cholera.

Besides Tanzania, African nations with some of the world’s worst doctor-to-patient ratios include Malawi, Ethiopia, Mozambique, Niger, Chad, Rwanda, and Somalia.

To ease the crisis in medical training, care, and health-related research, Harvard is working in partnership with several nations across the continent. Lecturer on Medicine David Bangsberg and the Harvard Initiative for Global Health have begun a Global Health Scholars Program, providing advanced training for health professionals in Uganda who are committed to continuing to work in their home countries. Harvard-affiliated researchers are also working in state-of-the-art laboratories in Botswana’s capital of Gaborone and in a similar facility at the Nelson Mandela Medical School in South Africa to get a better handle on those nations’ AIDS pandemics. In addition, physicians from Harvard-affiliated hospitals are assisting in a variety of health-related projects, from improving AIDS and TB care in the mountains of Lesotho to probing the roots of the violent rape crisis occurring amidst the turmoil of the eastern Congo.

Mwaikambo was speaking metaphorically of “the picture” in Tanzania — but a slide that she showed was indeed grim. Taken in a Tanzanian pediatric ward, the photograph showed a dark, dormitory-style room with little equipment, scarce privacy, and miserable-looking children slumped two to a bed.

Unfortunately, such a scene is not atypical in her country, or in others in the region.

Until her teaching hospital was started in 1997, there was only one medical school in Tanzania, graduating 25 to 40 doctors annually. “As if that was not enough,” Mwaikambo said, “a lot of these doctors would run away from the country.” The “brain drain” is understandable, she said, in a nation where it is so difficult to practice medicine, and where the pay is so low. “We can forget about them, because a lot of them wouldn’t consider coming home.”

Though the government still has not addressed the brain drain, it has liberalized education policies, which is one reason why her teaching hospital was able to get off the ground. In 1996, when the government passed a law to encourage the establishment of private universities in Tanzania, there were only three such institutions. Now there are 25, and Kairuki Memorial is one of the oldest and most respected.

But the hospital still faces many constraints, including finding qualified academic and administrative staff, maintaining adequate financial incentives for employees, and upgrading inadequate infrastructure. The entire university — lecture halls, labs, offices, and hospital — is housed in one nine-story building.

“It is an interesting process, starting a medical school from scratch,” Mwaikambo said. “All the little things that, coming from a government university setting, you never had to worry about — phones, computers, pens, and paper, things that were just there automatically — you now have to make appear. And those are just the little things.”

Though the school has collaborative relationships with the University of Utah and Duke University, telemedicine is impossible because Tanzania’s electrical service is too unreliable. Other challenges include teaching medical ethics — “It’s difficult to get students to do what they don’t see in their seniors,” said Mwaikambo — and brokering a working relationship between modern doctors and the traditional cultural “doctors” with whom most people feel comfortable.

But there is a brighter side. About 560 students are currently enrolled at Kairuki Memorial, and 161 physicians have graduated since 2004. The university hopes to expand soon by increasing its student base and by opening pharmaceutical and dental schools. Photographs of the university show neat rows of students concentrating at their desks; stacks of library books in a well-lit, modern facility; and proud graduates in colorful caps and gowns.

“We are facing our second decade with a lot of expectations of sustained growth and development,” Mwaikambo concluded. “In my opinion, the future looks assured.”