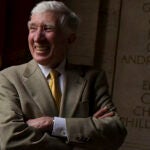 At age 12, Thomas Forrest Kelly became fascinated with the chapel organ at the Groton School, the Massachusetts boarding school he attended. Enthralled by its array of components — multiple keyboards, pedals, rows of red lights — he began taking lessons on the instrument.

“It looked just like an airplane cockpit,” he recalled. “What 12-year-old boy wouldn’t say, ‘I want to play that!” From there, it was a short step to becoming fascinated with early music.

Kelly, now the Morton B. Knafel Professor of Music, has come a long way since he first saw that organ. After receiving his doctorate from Harvard in 1973, he taught at Wellesley, Smith, and Amherst colleges before joining the faculty at Oberlin, where he directed the historical-performance program and was acting dean of the conservatory. Kelly returned to Harvard in 1994, and has since served as chair of the Department of Music and as a Harvard College Professor.

The Harvard Department of Music honored Kelly’s longtime contributions to the study of chant and performance practice with a conference Oct. 2-4 called “City, Chant, and the Topography of Early Music.” Based in Paine Hall, the conference brought together musicologists and scholars from around the world to explore ways in which space, urban life, landscape, and time have revolutionized plainchant (early ritual Christian chanting) and other musical forms.

The Department of Music traditionally honors faculty members by producing conferences that advance scholarship in their areas of specialization. In keeping with Kelly’s work, this symposium focused on the cultural, geographic, and political contexts surrounding early music.

“When it comes to chant studies, [Kelly] is one of the great figures of the world,” said Gallagher. “As we thought about his research, we recognized the importance of places. Benevento, Rome, Monte Cassino, Paris — these are places that he has connections with, either personal, professional, or both.”

Some conference sessions, including “The Musical Traditions of Benevento” and “Chant on the Italian Peninsula,” revolved fittingly around locations central to Kelly’s scholarship. The organizers also wanted to celebrate his well-known interest in premiere performances.

“I’ve always been interested in old music not as old, but as new,” said Kelly.

A piece of music, he contends, is best understood as part of its own place and time. This approach is reflected in his popular undergraduate course “First Nights,” which examines five musical premieres as significant moments of cultural history. Kelly published his lecture material as a book in 2000, and has since written a sequel, “First Nights at the Opera.”

Kelly saw the conference as a welcome opportunity for the University to draw attention to its strong resources in medieval studies. He also praised the dedication and imagination of his colleagues. “It was absolutely wonderful … The things they chose to highlight are exactly the things that please me most,” he said.

In all, the conference attracted 130 registrants, including musicologists, historians, performers, students, and community members. An Oct. 3 concert at Adolphus Busch Hall featured two of Europe’s most important medieval music groups.

“The breathtakingly beautiful concert by the ensembles Dialogos and Sequentia brought to life some of the music that Tom Kelly uncovered for us,” said Matthias Röder, Harvard College Fellow and lecturer on music. “What better way could there be to celebrate a man who has devoted his life to learning, teaching, and performing?”