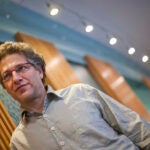 In
remarks last month at the National
Institutes of Health (NIH) in Bethesda, Md., President
Barack Obama said not only do we need stimulus money to create thousands of
jobs in the sciences and technology, but also to get the progress of the
nation’s research back on track.

“We
can only imagine the new discoveries that will flow from the investments we
make today,” Obama said. “Breakthroughs in medical research take far more than
the occasional flash of brilliance, as important as that can be. Progress takes
time; it takes hard work; it can be unpredictable; it can require a willingness
to take risks and going down some blind alleys occasionally — figuring out what
doesn’t work is sometimes as important as figuring out what does — all of this
needs the support of government. It holds promise like no other area of human
endeavor, but we’ve got to make a commitment to it.”

And
just last week, NIH
Director Francis Collins went further. In a New York Times interview he
warned that “the opportunities [for scientific advances] have almost never been
as exciting and the perils have never been as high” because of years of flat
funding.

It
may not be audible, but a clear sigh of relief is emanating from laboratories
across Harvard University this fall, as the infusion of federal stimulus
dollars provides new opportunities for faculty to bring their cutting edge
ideas forward to participate in a national peer review competition to expand
upon and create new knowledge.

After
years of flat or declining federal funding that left established researchers
treading water and young researchers struggling to begin their work, the billions
now flowing as a result of the American
Recovery and Reinvestment Act of 2009 (ARRA) have provided a welcome shot
in the arm for researchers at Harvard and across the nation.

Harvard Provost Steven E. Hyman said Harvard
is not only happy that its researchers — in medical as well as other fields of
research — are benefiting from the influx of funds, but the University is also
proud to be a part of a national endeavor to re-energize research and stimulate
the economy.

“We are gratified that as our leaders in Washington provide
essential funding for our physical national infrastructure they recognize as
well the vital role university research should play in our national recovery by
stimulating both current economic vitality and laying the foundation — through
research, discovery, and innovation — for future innovations that will be
carried on modernized roads, networks, and grids,” Hyman said.

Margaret
Livingstone, a professor of neurobiology at Harvard
Medical School, said the new funding has changed her daily life. In recent
years, she spent more and more time at the computer writing grant applications
to get the funding her laboratory needed to continue investigations of how the
visual system processes information and less time conducting the actual
research.

“I think it’s sad that people who are trained to do research
and who are good at doing research are spinning their wheels writing grants,”
Livingstone said. “Now I’m back to doing research.”

Livingstone said the $300,000 grant she received through the
National Institutes of Health has not only allowed her to turn from
administrative chores to research herself, but prompted her to hire an
additional postdoctoral fellow and begin a search for a second. She has also
bought equipment that extracts the tiny electrical signals issued by cells in
the vision system for analysis.

Timothy
Mitchison, the Hasib Sabbagh Professor of Systems Biology, said that some
ARRA funds will go to specialized equipment purchases, like those of
Livingstone, boosting high-technology manufacturing.

“Specialty
equipment often is necessary to pursue the precise work contemplated in these
kinds of cutting edge research,” Mitchison said. “In fact, a high-tech industry
exists that includes many small American companies that develop these specialty
items. Some of these will mature into widely used technologies, for example in
medical diagnostics.  ARRA funding will
certainly provide a boost to these entities as laboratories gear up for their
work.”

From 2003 to 2008, flat funding of NIH research programs led
to an 11 percent decline in purchasing power due to inflation. This financial
squeeze meant that fewer proposals were funded and by 2007, the overall effect
was that three out of four grant proposals to the NIH went unfunded. Young
investigators trying to establish their careers have been hit hardest, as the
average age of a first-time recipient of the NIH’s main grant program, called
an R01 grant, reached 43 years.

The net result has been a system whose arteries are clogged
with highly rated proposals in search of scarce federal dollars, according to a
report released in March 2008, “A Broken Pipeline?
Flat Funding of NIH Puts a Generation of Science at Risk.” While science
continued under constrained conditions, demand for funding was pent-up,
especially discouraging younger researchers, who can be dissuaded from choosing
careers in science. Testifying on the release of that report before the Senate
Committee on Health, Education, Labor and Pensions, Harvard President Drew Faust commented
that even as those compiling the report became “fearful that our nation’s
dampened commitment to biomedical research was hindering scientists’ abilities
to speed therapies to the bedside, our attention was collectively drawn to an
even more damaging longer term impact ­­— the loss and discouragement of a
generation of researchers.”

At the National Science
Foundation (NSF), similar trends were observed. In 2000, 30 percent of
grant applications were funded, a rate that fell to 21 percent by 2008,
according to the NSF. So many high quality proposals have gone unfunded that
the NSF plans to use almost its entire $2.5 billion research allocation from
the Recovery Act to clear its backlog of high quality, peer-reviewed proposals
rather than request a new round of proposals.

The science financed by the Recovery Act can now release
some of this pent-up scientific demand, as well as confront some of the central
issues facing the planet today. Two proposals that recently received NSF
stimulus funds will help provide a clearer view of the dangers of climate
change. One, which went to Assistant
Professor of Earth and Planetary Sciences Peter Huybers, will finance a
project to apply a new algorithm for examining the relationship between
precipitation and temperature using proxy records of climate, such as from tree
rings, in conjunction with instrumental records.

“This will allow me, a postdoc, and a student to pursue that
work in a lot more detail than would otherwise be the case,” Huybers said.

Weld
Professor of Atmospheric Chemistry James Anderson recently received notice
that an instrument project he’d proposed was approved using stimulus funds. The
project, he said, aims to fill in one of the glaring gaps in climate change
predictions: the effect of melting permafrost on atmospheric carbon dioxide
levels. The frozen ground in the world’s coldest regions contains a lot of
methane, itself a greenhouse gas, which breaks down to carbon dioxide in the
atmosphere. With rising temperatures, the permafrost is melting, but scientists
don’t know how much methane is escaping as a result. The impact on climate
change is potentially enormous, Anderson said, as melting permafrost can
possibly release more carbon dioxide into the atmosphere than all human fossil
fuel burning.

“A 1 percent melt rate adds 10 gigatons of carbon to the
atmosphere each year. The entire worldwide combustion of fossil fuels only adds
eight [gigatons],” Anderson said. “So this is an example of a truly lethal
feedback. How do you ever re-freeze the system, once it starts releasing its
carbon?”

Livingstone, Mitchison, Huybers, and Anderson are not alone.
As of early October, Harvard had received more than 180 ARRA grants totaling $144.8
million, 77 percent through the National Institutes of Health, 22 percent
through the National Science Foundation, and the balance from other places,
including subcontracts for other grant recipients.

The
government’s funding commitment comes with a responsibility to ensure the funds
are used wisely, according to Harvard’s Vice Provost for Research David
Korn.

“These
funds are being used to achieve the unique goals of the ARRA and require
enhanced oversight and reporting that will assure the public that every dollar
is going to productive uses,” Korn said. “We take no responsibility more seriously.
In just months, dozens of dedicated staff have helped both process and submit
more than 700 creative grant proposals from faculty across the University and
are now reporting — in detail — on every one of the 190-plus awards we thus far
have received. These specialists are engaged in jobs that will not show up in
calculations associated with stimulus money, but the work conducted is integral
to preserving the public support for the investment of these funds in cutting
edge scientific research.”

While this surge of scientific investigation across the
country fueled by ARRA will lead to downstream innovations that will spur the
economy in years ahead, Hyman said scientific funding is a critical component
of the local economy in places like Boston, one of the world’s foremost hubs of
life science research and development, because a large percentage of this
federal funding is spent locally.

“Our success in the national competition for ARRA-sponsored
research funding will surely move science forward and simultaneously enhance
our already substantial economic impact to the region by adding to the
two-thirds of the University’s budget that is spent locally,” Hyman said.

According to a January 2009
study by the New York-based research firm Appleseed, Harvard’s impact on the
regional economy, both directly and indirectly, was $4.8 billion in 2008,
generating thousands of local jobs and attracting hundreds of millions in
research dollars. Among Greater Boston’s largest employers, Harvard has paid
$1.3 billion to Boston-area suppliers and contractors for goods and services,
construction, and other spending, directly supporting an additional 9,100
full-time equivalent jobs in the Boston metropolitan area.

“In the context of the current economic downturn, ARRA
funding will buttress this critical role Harvard plays in our regional economy
while pushing the progress of science  —
the dual purpose the president and Congress intended,” said Kevin Casey, Harvard’s
associate vice president for government, community and public affairs.

Faust said the stimulus funding just strengthens the
partnership between the government and the nation’s research universities to
promote the kinds of investigation in which industry is often not interested.

“This
boost of federal funding is an important endorsement of the critical role
University-based research plays in our nation’s economic recovery and renewal,”
Faust said. “America has created a bold partnership between the federal
government and our research universities over the last 50 years, fueled by a
spirit of pioneering innovation and creative discovery. This partnership is
even more critical today, when the leaders of the global economy are
increasingly those who most effectively harness new discoveries in science and
engineering.”

One young investigator who will be spared the kind of
discouragement Faust testified about in 2008 is Priscilla
Yang, assistant professor of microbiology and molecular genetics at Harvard
Medical School. Yang said that, as a junior faculty member, the new funding is
important. Her stimulus grant, $275,000 over two years, will go to develop
mouse models for hepatitis C virus, which is the leading cause of liver cancer
in the United States. Yang hopes the award, made through a funding mechanism for
developmental/exploratory projects, will help her group to develop much-needed
tools for studying the virus and evaluating new potential treatments.

While the current funding scenario is encouraging, Casey echoed the concerns of federal officials
such as NIH Director Collins about the direction of future funding. Collins
said Oct. 7 in a published report that unless underlying NIH appropriations
experience some continued growth in the wake of the two-year stimulus program,
success rates of grant applications will fall to historic lows, where funding
may be available for just over one in 10 proposals. Casey said he hoped the
renewed federal commitment to science is maintained in the future so that
researchers across the nation finally getting traction with the influx of recovery
funds — and those who will follow — will build upon this new foundation.