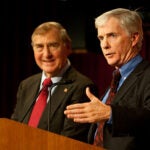 ‘Lessons from a Long War’

Baskin Oran explores impact of the West on Turkey

By any geopolitical measure, Turkey is a complex country. Woven into its cultural fabric are steadfast ties to Islam and a cherished tradition of secularism. For decades, the two have operated in tandem but not without tension.

Last year, that delicate balance teetered near collapse over a heated debate involving a constitutional amendment that would have lifted a ban on women wearing headscarves in universities.

In the new millennium, Turkey has had to carefully reexamine its national ethos. The European Union wants Turkey, which aspires to full membership in the organization, to continue adopting reforms, including broader freedom of expression and religious rights, before it will welcome the nation into its fold.

Turkish scholar Baskin Oran, who spoke at Harvard this week (Oct. 19), understands the complicated nature of the political landscape. An academic, he was asked to leave his university post three times amid government upheavals and reforms in the 1970s and ’80s.

An emeritus professor of international relations at Ankara University, Oran offered a broad historical perspective on his native land in the first of a series of six lectures titled “Western Impact and Turkey.” The Harvard Kennedy School’s Kokkalis Program on Southeastern and East-Central Europe sponsors the series in conjunction with a variety of co-sponsors from around the University.

In his first talk, Oran presented an overview of the various waves of Western modernization that have taken hold in Turkey. In the 1920s and ’30s, he said, the country underwent a series of reforms associated with Kemalism, the ideology developed by Mustafa Kemal Atatürk, Turkey’s first president, which promoted the notion of a democratic, secular country.

The changes transformed the core of the old Ottoman Empire into a nation-state. Instead of being subjects of the ruling sultan, people became citizens, though some because they were compelled to do so. Their national identity — while still Muslim — changed from Ottoman to Turk.