Painting pictures in our minds 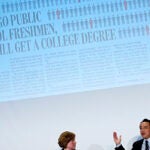 Novelists are either visual or verbal, Orhan Pamuk said during one of his Charles Eliot Norton Lectures. But novels themselves are both.

“We give up the perfect painting and the perfect text,” he said of novelists like himself, “and find something in between.

Pamuk is the 2006 Nobel laureate in literature and an erudite celebrant of his native Istanbul. His most recent novel, “The Museum of Innocence,” was published in English this month. He is in residence at Harvard this year, and holds the 2009-10 Charles Eliot Norton Professorship in Poetry.

The post was endowed in 1925, and comes with an obligation to deliver lectures that explore the arts. Norton lecturers — stellar poets, artists, composers, and critics — have included T.S. Eliot, Robert Frost, Aaron Copland, Italo Calvino, and e.e. cummings (who called his series “i: six nonlectures”).

Pamuk’s Charles Eliot Norton Lectures — all at Sanders Theatre — began on Sept. 22 and conclude with his sixth on Nov. 3. The series, titled “The Naïve and the Sentimental Novelist,” explores the experience of both reading and writing novels.

The novel is the dominant literary form in the West, but Pamuk’s lectures are the first to explicitly investigate that long-prose form since the Norton series began in 1926.

The dominance of the novel accelerated in the 19th century, said Pamuk in his Oct. 20 lecture, in part because the wealth-creating Industrial Revolution flooded the world with “an abundance of objects,” which in turn flooded the world of fiction with a new physicality. (Honoré de Balzac, he said, was the first to fill his novels with bric-a-brac, and Gustave Flaubert among the first to use objects as symbols of taste and character.)

This flood of objects makes novels more complex, said Pamuk, since they give the reader “a lot of complicated instructions to form pictures in our minds.” But at the same time, “all this visual opulence … banished the simpler meaning of life,” he said, and suggested that, unlike in traditional hierarchical worlds, “meaning was hidden somewhere in the shadows.”

The series title, “The Naïve and the Sentimental Novelist,” is an allusion to “Naïve and Sentimental Poetry,” Friedrich Schiller’s 18th century essay on the aesthetics of perception. It’s a favorite read that Pamuk said would inform all of his lectures.

A “naïve” reader, he explained, is immediately lost in the world of a novel, and surrenders to its emotional landscapes. A “sentimental” reader is more reflective, wondering all the while how much of the novel is real.

But in the experience of the novel, both aesthetic views converge. The reader is at the same time childlike (enjoying the story without reflection) and adult, wondering what is real, and even wondering if the writer is the same as the hero. (The second lecture was called, “Mr. Pamuk, Did You Really Live All This?”)

Asking if the writer and his characters are intimately related within the world of fiction “is no longer a naïve question,” said Homi Bhabha, director of the Humanities Center at Harvard, which is this year’s Norton Lectures sponsor. “That’s what I learned’’ from Pamuk, he said, “how a writer can manipulate his own voice to shape characters, create a range of voices, and still retain a ‘biographical’ presence in the novel that is quite distinct from his imagined individuals and fabricated landscapes. The writer as chameleon, perhaps?”

Bhabha, a scholar of post-colonial literature, is also the Anne F. Rothenberg Professor of the Humanities.

To Pamuk, the novel is an imaginary space where two contradictory impressions can exist at one time. That makes the novel, he said in his second lecture, a way to satisfy a modern desire “to escape the single-logic Cartesian world.”

This “absence of perfect consensus” is part of the novel’s power, said Pamuk, because it is “neither a complete work of fiction, nor completely factual.”

The competing creative impulses of the novel — is it more visual or verbal? — may also seem contradictory. But in the end they must live together, and in so doing they give the world a richness beyond a mere image or a set of words.

Pamuk explored this topic fully in “Pictures and Things,” his third lecture.

As usual, about 1,000 people crowded into Sanders to listen. The Norton Lectures this year have made Pamuk — mild, soft-spoken, and always in a dark suit — a periodic sensation in Harvard’s literary community.

Part of the draw may be that Pamuk as a young man explored so many other artistic directions. He studied architecture and wrote for television, and until age 23 was a painter rather than a writer. “For reasons I can’t make out,” Pamuk said, “I wanted to paint with words.”

As a painter, he said he was naïve, but as a novelist he was “more adult and sentimental.

Pamuk described his creative process, which draws on the interplay of painting and writing. Fountain pen poised, he said he first sees a picture of the world or scene he wants to evoke, then struggles to express it in words.

“In the beginning, there seems to be a picture,” he said, in a play on the opening of Genesis, “but it must be told in words.”

This act of aesthetic conversion is then reversed by the reader, who sees the words first, and then must convert them back into pictures.

Readers skip back and forth from words to images, but in the end “novels are fundamentally visual literary fictions,” said Pamuk. “Writing a novel is painting with words.”

The final Norton Lecture is at 4 p.m. on Nov. 3 in Sanders Theatre. To view video excerpts of past lectures.