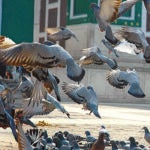 It looks like the outline of a prehistoric creature long vanished.

But the intricate glass skeleton isn’t in a natural history museum. It’s in a boathouse.

The permanent new art installation is part of the Weld Boathouse on Memorial Drive, created in honor of the building’s 2006 centennial. Harvard graduate George Walker Weld financed construction of the historic structure in 1906.

Suspended from stainless steel cables firmly anchored to the Weld’s arched ceiling, the glass artwork pays tribute to the countless rowers who have hoisted the narrow shells out of the Harvard landmark and carved the dark waters of the Charles River with their oars.

“We had a party for the 100th anniversary, but we also realized it would be nice if there were something more enduring,” said Karen Weltchek, vice chairman of the alumni organization Friends of Harvard & Radcliffe Rowing, which commissioned the work.

Made of 7-millimeter-thick fused rods of borosilicate glass, the sculpture includes a spiky, 40-foot-long spine that represents the slender wake of a rowing shell. On either side hang three pairs of circular forms, echoing the expanding ring patterns left on the water’s surface by a rower’s oars.

“This is a commission about history, and continued existence, and the effect of the past, the ripple effect,” said Ellen Kennelly, the sculpture’s creator. “It represents the sense that what has gone before continues, and widens, and still connects, literally, to our present.”

The group considered several ideas before moving forward with the glass sculpture. A bronze design was in the running until planners realized a bronze bust of Weld already surveyed the second-floor foyer from a prominent pedestal. A plaque was also considered. But the space, they decided, called for something grander in scale.

“When they said ‘art,’ I realized it had to be something that didn’t get in the way of this handsome, graceful space, that it had to be really harmonious with the building’s existing structure and form,” said Kennelly.

On a soft October afternoon, the sculpture glowed in the light of the fading sun.  A crowd gathered at an opening reception for the work, gazed at the installation 18 feet overhead, and listened as the artist explained how she created it.

The process was an “extreme lesson in physics,” said Kennelly, a 1985 Harvard graduate and former Radcliffe rower, who was originally tapped to develop a bronze work of art for the site after Weltchek had seen one of her sculptures.

For years, Kennelly’s main creative outlet was as a part-time wedding cake designer, while she taught English during the day. After taking a class in 1992 at the Museum of Fine Arts, she was hooked on sculpture and eventually became a full-time artist working exclusively with bronze.

Still an avid rower, Kennelly had long envisioned the iconic rowing design in her mind. She knew that it would fit perfectly just beneath the extended skylight that runs the length of the boathouse’s vaulted ceiling, and that it had to be in glass. The committee agreed.

Kennelly briefly explored hiring a professional glass artist, but it proved far too expensive, so the Harvard alumna — who had no prior experience working with glass — created it herself.  After a crash course in flameworking, including safety lessons on how to handle a propane/oxygen torch and how best to ventilate her studio of vaporized glass, she plunged into the project.

Simple draft paper took the place of computer-generated designs, and Kennelly used household garden wire covered in plastic wrap to create a mock-up of the piece, which she assembled in the boathouse to confirm the desired size. Over the course of six months she slowly fused the pieces together with her blowtorch, and had each section fired in a kiln to solidify its shape.

The work took three years from conception to completion, since the decision to go with a glass work consumed the first year, and another year was given over to Kennelly mastering the glass techniques required. She erected scaffolding and hung the piece in August, working carefully in the indoor summer heat to attach each fragile section securely.

“It’s far beyond anything I imagined it could be,” Liz O’Leary, head coach of the Radcliffe heavyweight crew program, said of the new art. “I love it. I just love it.”