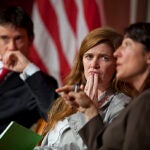 It was a mini-reunion of sorts on Thursday (Oct. 22) as the U.S. Secretary for Housing and Urban Development (HUD) Shaun Donovan ’87 participated in a discussion on public service with Harvard President Drew Faust.

As it happens, Faust’s first job after college was with HUD, representing local communities in Philadelphia. She said the work grew largely out of her exposure while in college to important issues of the 1960s, including civil rights, social justice and equality, poverty, and urban decay and blight.

“I wanted to see if I could make a difference in some way on these issues,” Faust said

Faust spoke with Donovan at the Center for Government and International Studies’ Tsai Auditorium. The conversation was part of a week’s events highlighting public service opportunities and offerings across the University. Dean David Ellwood of the Harvard Kennedy School (HKS) introduced the event, which was moderated by Washington Post columnist E.J. Dionne Jr.

Donovan recalled that after three months with HUD during the Clinton administration, he wondered if he had made a terrible mistake. But reading through piles of letters on his desk from families around the country desperately trying to save their homes and needing help, the 1987 Harvard graduate said he knew “he couldn’t do anything else.”

“Here I was,” he told the crowd, “with the ability to make a real difference in the lives of literally millions of families around the country.”

His time at Harvard strongly influenced his decision to devote his life to service, said the secretary. As an undergraduate he volunteered at a homeless shelter. While studying architecture at Harvard’s Graduate School of Design (M.A.R. ’95) he was determined to design affordable housing, but only truly realized what that entailed after taking a class with Bill Apgar, lecturer in public policy at the Kennedy School, where Donovan also studied (M.P.A. ’95).

There, Donovan said, he learned that housing isn’t just about “the bricks and mortar, but neighborhoods.”

Later, Apgar convinced Donovan to work with him at HUD.

Also, while in graduate school, Donovan took a seminar with Robert Coles, child psychiatrist and Harvard professor of psychiatry. As part of the course, Donovan participated in service work with civil rights activist Robert Moses.

“For me it wasn’t just about the service, it was about connecting my sense of my need to serve and my impulse to serve with the academic work that I was doing,” said Donovan, noting that fundamental connection was critical to his education.

“That kind of framing service in a broader context is really, really important for a university,” he said, adding, “If it hadn’t been for Coles, I wouldn’t be here doing this work.

“This is a knowledge-based business in a fundamental way. We are knowledge producers here in the University, and the government needs to be a knowledge consumer and user,” Faust said. “I think having those links clearly delineated is so important for how we address our problems.”

In closing, Dionne invited the crowd to get involved.

“Please, all of you, have the courage to change our country.”