‘Lessons from a Long War’ 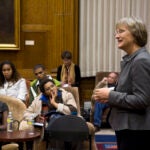 Retired diplomat Ryan C. Crocker was ambassador to five countries in the Middle East in the past 20 years. He has two words of advice for Americans who are curious about the world’s volatile regions: geography and history.

When U.S. foreign policy falters, Crocker told the audience at the Harvard Kennedy School (HKS) on Oct. 16, it is often from a failure to understand geography and history.

He opened his talk, “Lessons from a Long War,” by displaying a map of the wide swath of the world he defines as the Middle East: from Morocco in the west to Afghanistan and Pakistan in the east. (Definitions of the area vary according to which U.S. agency does the defining, said Crocker.)

Within that swath, he said, most countries have had “a pattern of interaction with the West” that shapes present attitudes. These interactions, starting with Napoleon’s invasion of Egypt in 1798, have produced “distinctive political cultures” in the Middle East, said Crocker, cultures that have learned both the strength of the West (military force) and its weakness (political will).

“History is important,” said the 37-year-career diplomat, and “the first lesson from this long war … simply means understanding.”

Crocker acquired some of that understanding early. Born in Spokane, Wash., he spent time while growing up in an Air Force family in Morocco and Turkey. In 1971, right after college, Crocker set off to see more of the world, traveling through Kabul, and Calcutta, among other places.

He joined the U.S. Foreign Service, taking posts over nearly four decades in leading international hotspots — ones that even today remain volatile. Crocker served as ambassador to Lebanon, Kuwait, Syria, Pakistan, and Iraq.

Imagine a pictorial of “every major setback in the Middle East in the last 25 years,” he told a capacity crowd at the John F. Kennedy Jr. Forum. “I would be in every one of them.”

As U.S. ambassador to Iraq in 2007-09, Crocker witnessed an “imminence of disaster” that shifted “to a far, far better place” after a surge in U.S. forces. (President George W. Bush called Crocker America’s “Lawrence of Arabia,” and after the surge nicknamed him “Mr. Sunshine.”)

At HKS now, said Crocker, are two of the architects of the transformation of American presence in Iraq during his ambassadorial tenure: Brett McGurk, now a fellow at the Institute of Politics, the event’s sponsor, and Meghan L. O’Sullivan, now the Jeane Kirkpatrick Professor of International Affairs at HKS.

Crocker is a model of service, said McGurk, introducing the ambassador. “When your country needs you, you go.”

But going should also mean going prepared — not always easy for Americans, whom Crocker described as “challenged” both historically and geographically. “We are a nation of today and tomorrow,” he said, and not known for having “strategic patience.”  That impatience hurts us, said Crocker. “Our allies have come to fear it, and our adversaries have come to count on it.”

Along with that impatience comes another difficulty and another lesson from a long war, he said: the idea that actions overseas have consequences that reverberate for years and even decades. Contemplating major action, he said, also means contemplating major risk.

If Americans are careful about committing themselves, said Crocker, they have to be equally careful about “un-committing” — the act of withdrawing from a commitment.

That hurt in Lebanon in 1981-82, he said, when the United States committed troops, only to withdraw by 1984. That cemented a Syria-Iran alliance that persists today, and promulgated an unintended lesson about Americans, said Crocker: “They will give up, they will get tired, they will go home.”

“Un-committing” in Afghanistan in 1989 led to the ascent of the Taliban, he said, a safe haven for Al Qaeda, and ultimately to the 9/11 attacks.

The trouble with “un-committing” has ongoing relevance, he continued. In Iraq, the U.S. commitment is “six and a half years on,” but “I’m here to tell you’’ it “is just getting under way.”

National elections scheduled for January, he said, “will tell us a considerable amount about … what Iraq looks like in its near-term future.” Great change may be ahead in a nation that for 50 years has defined itself as an adversary of the West, and now seems to want to align itself with it, said Crocker. There are signs of “new directions in an old region, and in an old political culture.”

And Iran? History puts the current standoff over nuclear arms programs in perspective. Iran has always seen itself as a regional power, said Crocker, “an issue that is millennia old.” So dissuading the regime from its nuclear path will be very hard. “This is a quest,” he said, “rooted in a basic sense of who they are.”

As for Afghanistan, said Crocker, the longer a White House assessment of forces is delayed, the more likely the region will wonder about U.S. resolve. Crocker advised against getting sidetracked by controversy about recent elections, since what matters “is what the government does, not how the elections are run.”

“Try to see the region in its own terms, not apply our own judgments and optics to it.”

Seeing a region in its own terms sometimes means dealing with leaders who, to Western eyes, may not seem wholly legitimate or reflecting the will of their people. Crocker has dealt with leaders Pervez Musharraf (Pakistan), Hamid Karzai (Afghanistan), and Nouri al-Maliki (Iraq).

“You’ve got to deal with what is,” said Crocker, “without being blinkered” to the broader realities of a country.

In Pakistan, memories are long too, he said, about the changeable ally-adversary relationship between the two countries. That leaves Pakistanis wondering if the old refrain will apply again to fickle Americans, said Crocker — that they will “get tired, lose patience, and go home.”

One fact mitigates against America’s seeming lack of will, said Crocker during a question-and-answer session. A military presence in the Middle East goes back 50 years, “a long-term footprint,” said Crocker, “to assure we are around as long as we need to be.”

Another source of strain in U.S. diplomacy is the fact that there are only 6,400 generalist Foreign Service officers, when a recent report says the nation needs 4,700 more. “We just don’t have the people,” said Crocker, so “we pay the price.”

Event moderator Graham Allison, Douglas Dillon Professor of Government at HKS, interjected that there are more musicians in the U.S. military than there are Foreign Service officers.

Meanwhile, said Crocker, U.S. diplomatic circles should be more open to using outside experts, “those who may know different and better than we do” in cultural and linguistic matters, including experts from the U.S. military.

“You will be entering a world of almost all bad choices, certainly tough choices. It is almost never black and white,” he said. “And again, those choices entail consequences — consequences of action, and consequences of inaction.”