In praise of public service 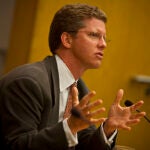 Gov. Patrick: ‘It brings meaning and purpose to our lives.’

Even while extolling the virtues of public service, Massachusetts Gov. Deval Patrick focused on the pitfalls of public life during remarks in an Oct. 22 Harvard Kennedy School forum on “Inspiring Public Service.”

When he was elected governor in 2006, Patrick said, “I will admit there were a few things I did not anticipate. I knew there would be close media scrutiny but I did not anticipate that sometimes I would be left feeling that if I walked on water, the headline splash would be: ‘Patrick can’t swim.’”

As the laughter faded, he added, “I knew that change would come slowly. But I did not anticipate that we would sometimes have to do hand-to-hand combat with members of my own party.”

But even after recounting his own woes, Patrick described public service as a “balm for all the fear and the pain and all the uncertainty and disruption of our current economic distress.”

“Service stirs us. It brings meaning and purpose to our lives,” Patrick said. Yet, “Only a fool would say it’s easy.”

In her introduction, Harvard President Drew Faust praised Patrick’s record, saying, “Public service has been a central dimension of his personal and public life.”

Patrick, who graduated from Harvard in 1978, spent a graduate year in the Darfur region of Sudan in a United Nations youth training program. He received his J.D. from Harvard Law in 1982 and went on to work in both the public and private sector, including stints in the U.S. Justice Department under the Clinton administration.

Patrick, who faces a tough re-election battle, recounted the accomplishments of his administration while emphasizing the challenges from tough economic times.

“We are in crisis. We have only the barest appreciation today of how close we were to full-blown Depression just a year ago,” he said.

He cited accomplishments that included closing an $8 billion budget gap and delivering three responsible budgets “on time”; reforming the state pension system; reducing auto insurance rates; and improving education. “And people can marry whomever they love here in Massachusetts,” a line that drew the loudest applause.

In what appeared to be a reference to his clashes with the legislature, Patrick said that for every move forward, “there is a chorus of cynics out there waiting to shout you down.” But “it was ever thus. And I ask you not to listen to them.”

“We need you to articulate what the world should look like and then to work with us, all of us, to make it so,” he told his audience.

Patrick emphasized he focuses on issues, not the push-pull of political gamesmanship.

“Victims of domestic violence don’t care what happened on Wall Street today. Second-graders and crowded classrooms don’t care about budget cuts,” he said.  “Our need is too great and too personal for us to be either distracted or seduced by policy points and statistics, let alone by headlines and gossip.”

In the question-and-answer period, Devin Romanul, M.P.P. ’11, asked Patrick to assess the strengths and weaknesses of Massachusetts’ health insurance reforms and its implication for the national health care reform debate.

Patrick praised the commonwealth’s health reforms, and offered “kudos” to his Republican predecessor Mitt Romney and the late Sen. Edward Kennedy, among others, for making an unusual choice between “a perfect solution and no solution at all.” While noting that 97.4 percent of Massachusetts’ residents had health insurance, Patrick said that reform added only about 1 percent to the commonwealth’s budget and that the problem of escalating premiums is “independent of health care reform.”

Indeed, “I frankly don’t understand [how when] everything else is going down, or flat, premiums go up 15, 20 percent year after year,” he said. He also said he supported a public health insurance option nationally, adding, “I wish we had one in Massachusetts.”

To learn more about Public Service Week at Harvard.