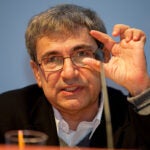 Does Bo Diddley rule the world?

Though he died last year, the iconic singer and guitarist of American blues and rock still rules the rhythms of the world, says computer scientist Godfried Toussaint. Toussaint uses complex algorithms to ferret where the rhythms of world music came from — in the same way an evolutionary biologist might hunt for the origins of, say, an arthropod body part.

Diddley’s instrument of power is the clave son, a pattern of beats so compelling, said Toussaint, that in the past 50 or 60 years it “has captured the entire planet.”

Toussaint, a professor emeritus and researcher at McGill University, is a Radcliffe Fellow this year. He is a pioneer in computational geometry, a branch of computer science that expresses algorithms in geometrical patterns. In his search for ancestral rhythms, Toussaint constructs necklacelike sound patterns that resemble the face of a clock. (Rhythms are repeated throughout a piece of music, he reasoned, and therefore should be expressed in a cyclic way.)

Toussaint is quick to say his studies leave out harmony and melody, the two other facets of music’s three-legged stool. But except for the last century, he said in a Radcliffe lecture Oct. 14, rhythm has been neglected as an object of study since the fourth century B.C.E.

“Evolutionary musicology” — the search for music’s origins — has traditionally been the province of anthropologists, he said, but why not employ the techniques of information theory and machine theory to music? “Radcliffe is about crossing boundaries and taking risks,” said Toussaint, “so I think it’s appropriate.”

Besides, he said, phylogenic analysis is already being used to describe the evolution of cultural objects, including spear points, swords, and helmets. The time seems right to add musical rhythm.

His research into the evolution of rhythms is an attempt to find a phylogenic tree — a graphical display of evolutionary relationships starting from a common “ancestor” rhythm and spreading upward into multiple branches.

Within this tree, musical beats – expressed as a sequence of binary numbers — form distinctly shaped “timelines.” These memorable rhythmic patterns of short duration are a sort of musical DNA. Bo Diddley’s clave son is one example.

Toussaint has already tested the effectiveness of computational geometry in constructing phylogenic trees for rhythms. He started with flamenco, a traditional Spanish music genre known for its intricate and rapid rhythmic patterns. Beginning with about 70 of these patterns, Toussaint arrived at five schemes of musical meter that seemed to underlay all the rest.

One of those meter schemes, in turn, seemed closest to the center of an evolutionary tree. From this, Toussaint reconstructed an “ancestral” rhythm that in theory could account for the rest. The point, he said, is that “mathematics can influence music.”

Toussaint, lecturing to a crowd of 80 at the Radcliffe Gymnasium, acknowledged early on that music and mathematics have had a long relationship – beginning with Pythagoras, who said, “There is geometry in the humming of the strings.” Philosopher and mathematician Gottfried Leibniz observed that a musician often “does not realize he is manipulating numbers.”

Toussaint even quoted contemporary jazz guitarist John McLaughlin: “The mathematics of rhythm are universal. They don’t belong to any particular culture.”

Toussaint also mentioned Princeton University composer Dmitri Tymoczko, a Radcliffe Fellow in 2005-’06, who wrote “The Geometry of Chords” in 2006. It was the first paper on music theory to appear in Science magazine. (He invented graphic representations of two- and three-note chords, positing that they inhabit DNA-like “orbifold spaces,” concise musical terrains shared by Chopin and Deep Purple alike. Get outside of these spaces, and chords are screeches.)

But despite having a long family history, music and mathematics largely neglected how rhythm fits in, as opposed to harmony and melody. Early Greek philosophers, Aristoxenus of Tarentum among them, wrote about music and rhythm – and about rhythm as a property of dance and speech too. Then came ages of silence.

It was not until a century ago that German ethnologists began to notate music rhythms, said Toussaint, bringing them back into play as objects of study.

But it is difficult to trace how a rhythm migrated from one place to another, he said. Diddley’s contribution, for instance, is somewhere within musical migration patterns that zig and zag from Africa to Cuba, to New York, to New Orleans, and then back.

Toussaint, a jazz drummer, played snippets of rhythms on sticks or a cowbell, and illustrated pathways of evolution with modern music samples. Included were Ravel’s “Bolero” on a snare drum, and “Electric City” from the Black Eyed Peas. (Hello again, clave son.)

Then came a sample from “Mosali,” by Congolese singer Kanda Bongo Man. “It’s a dangerous rhythm,” said Toussaint, looking out at his foot-tapping audience. “It could degenerate into a party.”