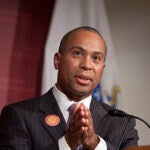 In praise of public service

'You don’t know what will save a child,' says 'Call of Service' Award winner

For Geoffrey Canada, the path to salvation began with “Green Eggs and Ham.”

A committed first-grade teacher, who refused to give up on her disengaged student, caught his attention by connecting him to the children’s author Dr. Seuss. The boy was instantly addicted, Canada recalled before a packed Memorial Church, teaching himself to read, and consuming everything from the rhyming writer by the end of the school year. It was the beginning of his lifelong love affair with poetry.

“You don’t know what will save a child,” Canada said, emphasizing his point that all children, rich and poor, need exposure to a wide range of subjects to succeed.

Later, coming face to face with the despair that was daily life in 1950s South Bronx, where he grew up, Canada said he took comfort in the poetry of authors such as Langston Hughes.

“There is no doubt in my mind that poetry saved me,” he said, adding, “Our job is to keep exposing [kids] to different kinds of things until they figure out what they need.”

Tonight (Oct. 23) Canada was honored with the Robert Coles “Call of Service” Lecture and Award for his work. The annual event is sponsored by the Phillips Brooks House Association and recognizes individuals who have made significant contributions to the public service realm. Past honorees include Al Gore, former vice president and environmental activist, and Marian Wright Edelman, president and founder of the Children’s Defense Fund.

The event’s namesake, Robert Coles, professor emeritus of psychiatry and medical humanities at Harvard Medical School, looked on from the second row. Coles is a noted author whose work chronicling how children cope with difficult challenges is widely acclaimed. He has received the Pulitzer Prize and the Presidential Medal of Freedom. In his role as a teacher at Harvard, the event’s program noted, Coles “has influenced the lives of thousands of students who found in his teaching an emphasis on humanity, compassion, and ethics.”

The evening ceremony was a highlight of Public Service Week at Harvard, a series of activities and events organized to help shine a light on the diverse public service landscape at the University and the various ways that students can get involved in service.

In a talk that was both humorous and heart-rending, Canada, who graduated from the Harvard Graduate School of Education in 1975, offered a grim assessment of the inequalities in the nation’s education system and the prescription for its reform.

Extended school days and mandatory summer classes are required if the achievement gap is going to close, said the Harvard alumnus. Teachers need to be paid top salaries, and the ones who don’t perform need to be shown the door, he said of the crop of “lousy” teachers who too often populate schools in urban and poor areas. In addition, school administrators and officials must be held accountable.

“We have to deliver for these kids … this work is some of the most important work in this country.”

Canada championed the system he developed as part of the Harlem Children’s Zone, a nonprofit he founded in the 1990s that uses a comprehensive formula for a child’s well-being, a network of medical, education, and social services.

The work, he said, includes teaching parents “what we know about the science of raising a child.”

“No one tells parents who are the poorest … there is all this information but it’s not consumable by the people who need it the most,” he said.

In addition, said Canada, a pipeline of support is critical to ensure that children in poorer communities are continually moving forward with their education instead of taking great steps forward and then slipping back as a result of poor teaching and inadequate education programs.

“You’ve got to make sure that kids go from one high-quality, best-practice program to the next.”

The work, said Canada, requires a 20-year commitment, one that follows a child from birth to college, with higher education the ultimate goal that should be set for every child, regardless of economic background.

“We are simply trying to replicate in poor communities what we take for granted in middle-class America,” he said, noting that with his program he and his colleagues realized “we are going to have to save our own kids.”

Before his talk, Harvard President Drew Faust welcomed Canada and honored him with the Coles award.

“I can think of no better person to inspire us than Geoffrey Canada,” said Faust, who noted that the honoree overcame great odds in his own life to go on to help thousands of others do the same through his “legendary” determination and refusal to give up.

“Geoffrey Canada, because of your tireless work, creative thinking, and perhaps most of all your passion,” said Faust, “the odds for countless children born into low-income families are being transformed in Harlem, and are being improved throughout the nation. Harvard University is very proud of our association with you.”

Canada closed the evening by reciting lines from one of his own poems.

“So you and I we must succeed, in this crusade, this holy deed, to save the children of this land, have hope, we’re here, we take a stand.”