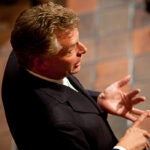 Focused on the future

The former speaker of the U.S. House of Representatives and key architect of the “Contract with America” that gave Republicans a congressional majority in 1995 said the country faces serious challenges in the coming years that will require major reforms and a tri-partisan approach.

Newt Gingrich offered a multistep improvement plan for the United States at the John F. Kennedy Jr. Forum this week (Oct. 8), contending that many of the nation’s current political, economic, and legal systems need overhaul.

“These challenges are so fundamental that they will shape for most of you the nature of your life over the next 40 to 70 years,” he told the crowd, listing five realities facing the United States: the importance of technological innovation, the increasing influence of China and India, the nation’s ineffective bureaucratic and litigation systems, the need for a cultural dialogue about values, and a government out of touch with the American people.

Over the next 25 years, a technological and scientific revolution will result in a wave of dramatic change that the nation is unprepared to handle, Gingrich said.

To take advantage of progress, including advances in brain science, which he said will represent “the largest scale of change in new knowledge,” the government needs to rework its budget system to incorporate a long-term strategy.

“The current question is how much can a politician spend. Therefore, how do you scientists want to prioritize it?” The real question, he offered, has to be: “What is the optimum you could invest in research to maximize the likelihood of a breakthrough, and how do we finance it, which is exactly the opposite of the way we currently do business.”

According to Gingrich, the country also needs to reexamine its fundamental values, engaging in a “national dialogue” that addresses overarching concerns such as health care, social security, and education.

“We need a dialogue that says every school that isn’t teaching effectively should change tomorrow morning, because every day it doesn’t change we destroy children, and they end up in jail instead of in college. That’s a dialogue that’s cultural, not political, because it’s [about] core values that are at the heart of the system.”

Since leaving elective office a decade ago, Gingrich has become a regular on the lecture circuit. He is the author of several books, and has produced historical and public policy documentaries. In 2007 he formed American Solutions for Winning the Future, a tri-partisan group of Republicans, Democrats, and independents. He also has been mentioned as a possible candidate for president in 2012.

China and India, both rising rapidly in influence, represent a challenge, he said. For the United States to remain competitive in a world where those countries pose serious economic competition, there needs to be sweeping reform involving litigation, taxes, education, health, energy, and infrastructure. Such wide-scale change requires the involvement of elected officials at every level, as well as tri-partisan consensus.

“You have to find a way to bring people together … you will never get that done on a narrowly partisan basis.”

Gingrich peppered his talk with comments drawn from history and literature, quoting onetime Chinese leader Deng Xiaoping in one breath and American President Thomas Jefferson in another. He cited 20th century writers George Orwell and Albert Camus, and used the example of the Wright Brothers and their battle with the Smithsonian Institution over who could claim rights to the first in flight to demonstrate the kinds of bureaucratic pitfalls he thinks hamstring current space progress.

That story, he said, illustrates how “You end up with these petty, bureaucratic, ‘I’m in charge, you’re not in charge, I don’t like your idea’ … all this stuff that is fundamentally wrong.’’

His solution to the problem would involve cash prizes and tax credits, since “You have to figure out how to get it away from the bureaucracy to maximize the opportunity of entrepreneurs to invent a better future.”

In the question-and-answer session, Gingrich didn’t hold back when asked his opinion on the recent national health care reform bill sponsored by Sen. Max Baucus. Gingrich said the bill would increase taxes and render the United States less competitive. “That’s what we are about to do,” Gingrich said, “and it’s going to be an enormous mess.”