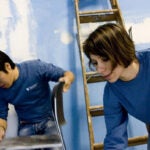 Growing up in the San Francisco Bay area, art historian Jennifer Roberts played soccer and focused on her schoolwork, at least partly to avoid some unusual chores.

“My father believed in the character-building potential of physical work,” said the recently tenured professor of history of art and architecture in the Faculty of Arts and Sciences (FAS). “I spent every weekend and most summers doing pretty hard manual labor: digging ditches, weeding, and carrying bricks, logs, and boulders.”

Though Roberts was unfamiliar with art history before going to college, she sees a connection between her childhood experiences working outdoors and the way she currently thinks about her field.

“I developed a very early sense of the resistance of things and the world of matter,” she explained with a laugh. “Now, much of what I study is the ‘materiality’ of art. Any work of art has its foot in two different worlds: the ‘other’ world that it represents or evokes, and the actual material world, where it has certain dimensions and weight, is made out of certain kinds of stuff, is hard to move around, and is difficult to protect from physical decay. It’s that side of works of art —  their material presence and heft — that I’m most interested in.”

Once an aspiring scientist, Roberts spent two years in a human biology program as an undergraduate at Stanford University before switching her major to English.

“I found myself enchanted by the humanities and by a whole new world of meaning that I hadn’t had much access to in high school,” she says.

After enrolling in a modern-art class at the end of her junior year, Roberts had a revelation. She loved the interdisciplinary nature of art history and soon added it as a second major.

“In college, I had a lot of trouble deciding what I was going to do with my life; I was interested in everything,” she said. “Art history seemed to be a field where I could continue to be interested in everything, and I could continue to work on topics related to the sciences or to literature. I still very much believe that this is true of art history, and this is why I still do it, and why I’m never bored.”

Roberts continues to incorporate a variety of disciplines, such as crystallography and geology, into her scholarship. While working on a chapter of her most recent book, “Pictures in Transit: Matter, Memory, and Migration in Early American Art,” she took up bird-watching to better understand the illustrations of one of her central subjects, John James Audubon.

“It became quite addictive,” she said. “Bird-watching for me is similar to the kind of energization I had when I first started studying art history. By learning to be attentive in a different way, you see things that have always surrounded you but you never noticed. Your entire sensory apparatus becomes more attuned.”

Roberts received her doctorate from Yale University in 2000. When she arrived at Harvard two years later, she became the first full-time Americanist in the history of her department.

“That was something that was especially exciting about coming here: the challenge and the opportunity to build a program from scratch,” she said. “One of the things that is most gratifying for me, having been here for seven years, is that now we really do have a program in American art, where there was nothing before.”

As a teacher, Roberts hopes to instill the importance of attending to art objects as things, a message she took from Jules Prown, her adviser at Yale.

“Very simply, his attitude toward art history was that any work of art can have an infinite number of contexts attached to it and an infinite number of meanings, but that the first step one must take in any kind of art historical inquiry is to stop and pay very, very close attention to the specific material qualities of the object. This is a deceptively simple lesson, but one that I am always trying to pass on to my students.”