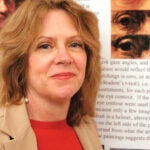 Harvard President Drew Faust broke bread with about 60 graduate and undergraduate students from various African countries Thursday evening (Oct. 15) to get acquainted and solicit advice on her upcoming trip to southern Africa in November.

The gathering, in the Barker Center’s Thompson Room, drew students from across the continent, including South Africa, Botswana, and Sierra Leone, among others.

Faust, who will travel to South Africa and Botswana during Thanksgiving week, said the trip is intended to bolster the many ongoing partnerships the University has with institutions and organizations across Africa.

Her trip will include stops at South Africa’s University of Johannesburg, Soweto, where she will deliver a speech; Parktown High School for Girls, in a Johannesburg suburb; a partnership program with faculty from the Harvard Graduate School of Education; meetings with alumni in Johannesburg and Cape Town; and Botswana’s capital of Gaborone to visit a collaboration between the Harvard School of Public Health AIDS Initiative and the government of Botswana that has played a key role in transforming the fight against the disease there.

Faust said her trip, though serving an official purpose, is also a personal one. As a Civil War historian, Faust said she has often heard comparisons made between slavery in the United States and apartheid in South Africa and has wanted to visit that country for some time.

“Africa has always been very meaningful to me, and I’m very excited to be going there,” Faust said.

Faust also said the visit to the girls’ high school is important to her, as was her visit to a girls’ school during her 2008 trip to China. Faust said she became very aware of the symbolic nature of her role after receiving a flood of letters and messages from girls and their parents who said that Faust’s ascension to Harvard’s presidency shows that girls can do anything.

The hour-long gathering took place in the wood-paneled Thompson Room under a large portrait of President Teddy Roosevelt, who graduated from Harvard in 1880. The session was set up living room style, with couches and chairs, and those who attended had a buffet supper.

Faust mingled with the students, standing at one point and describing her trip prior to fielding questions and suggestions before the whole group.

Students weren’t shy about sharing thoughts, urging Faust to keep in mind that she is visiting individual nations, not just the African continent. They also urged her to get off the beaten path and send a message of inclusion to those she meets. Several students said they have been surprised at how few students from African nations are at Harvard and suggested that may be due to a perception that –  despite the University’s need-blind admissions policy — Harvard is out of their reach.

Along those lines, Yvonne Malan, a student at the Harvard Kennedy School, said many South African students view the University of Oxford as a more accessible choice for them, while Kim Tichmann, a student from South Africa who lived in Botswana for five years, said students in Botswana also need to hear the message of inclusion, since many think the nation’s single university, the University of Botswana, is their only choice for a college education.

Other speakers cautioned Faust that a balance has to be struck on the issue. Her message, they said, should include an awareness of the sensitivity to a brain drain, where promising students go to school in other nations and never return. Still others urged her to promote education generally and college education specifically.

Perhaps the most practical suggestion came from a student who said Faust should emphasize the ways that students can access Harvard right away, through distance classes at the Harvard Extension School or by viewing lectures posted online, such as those by Lawrence University Professor Michael Porter.