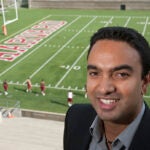 Television still has the ability to teach as well as entertain, a Hollywood insider says, because compelling storytelling provides a riveting way to help educate viewers.

Speaking to a crowd of students and faculty at Longfellow Hall about the importance of compelling storytelling, Baer said, “Stories are the currency of our lives. They are the measures of our days. We are nothing without our stories because stories encapsulate our fears, our failures, our dreams, and our desires.”

Effective television stories, he said, can “offer the viewer a template to reflect on his or her own life experiences,” as well as provide important educational information. Television dramas lend themselves particularly well to storytelling, Baer noted, because they reflect viewers’ own daily struggles and “dramatize the messiness and conflict inherent in social issues through the TV characters’ beliefs and actions.”

Previous lecturers included Gary Knell, president and chief executive of Sesame Workshop, and Michael Flaherty, president and co-founder of Walden Media, the company known for its film versions of children’s classics such as “The Lion, the Witch and the Wardrobe” and “Charlotte’s Web.”  The discussion was part of the School’s annual Askwith Forum lecture series.

Showing clips from his popular crime drama, Baer discussed how the show’s themes often involve ethical dilemmas drawn from everyday life. By examining complex issues such as abortion, prison torture, and child immunization in compelling ways through sympathetic characters, Baer said, his stories often have the power to educate and inform better than simple statistics might.

“Fifteen million AIDS orphans, that [number] is hard to grapple with. But when you hear a story … stories move us,” he said. “Nothing is more liberating than telling a story, Baer added. “If it is honest, people will listen.”

While working on the doctor drama “ER,” Baer and the Kaiser Family Foundation, a private, nonprofit group that focuses on health care, polled random viewers in 2000 before and after an episode aired on the human papillomavirus. The study – an effort to determine whether viewers picked up on any of the factual elements in the show – revealed that before it aired only 19 percent of those surveyed knew the virus was directly associated with cervical cancer. Following the episode, the statistic had risen to 60 percent.

Baer also showed a moving clip from the recent documentary “Mozambique,” made by a young African AIDS orphan. Baer, working with a project to have AIDS orphans tell their own stories, helped equip the teen with a camera and basic editing and producing skills. The 16-year-old’s film won critical acclaim and appeared in several film festivals.

“I am convinced that telling one’s own story is empowering,” said Baer. “It means you matter.”

During his talk, the producer, who also holds degrees from Harvard Medical School (’96) and Harvard’s Graduate School of Arts and Sciences (’82), acknowledged one of his HGSE mentors in attendance.

Her classes “were about telling stories, stories, stories, and the power that stories have,” he said, motioning to Sara Lawrence-Lightfoot, Emily Hargroves Fisher Professor of Education, who was seated in the front row. “Thank you, Sarah.”