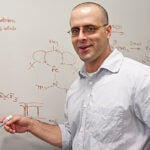 James Mallet is out to rehabilitate Charles Darwin’s reputation on species.

It may seem strange that such a founding father of modern biological thought as Darwin could run afoul of something so basic, but biologists over past decades, including such giants as Harvard’s Ernst Mayr, perceived Darwin’s understanding of species as somewhat fuzzy.

According to Mallet, Mayr, who was director of Harvard’s Museum of Comparative Zoology through much of the 1960s, himself held a clear view that species were distinct entities, the main biological unit on which evolution operated, and which only arose after populations were separated long enough that the differences that marked them as distinct species could accumulate.

Mallet, a professor of biology at University College London, is spending his fellowship year at the Radcliffe Institute for Advanced Study writing a book on speciation. In a talk delivered Wednesday (Sept. 30) at Radcliffe Gym, Mallet argued that Darwin’s views on speciation have been misrepresented, and, in addition, that biological evidence backs up Darwin’s actual views.

The dispute hinges on the idea of what exactly a species is. For Mayr and other biologists the issue was clear. For Darwin, Mallet says, it was another story.

Darwin did talk about species, but he also discussed lesser distinctions such as varieties, muddying the playing field a bit. Mayr, however, did his share of muddying the perception of Darwin’s thinking on speciation through Mayr’s selection of Darwin quotes, which Mallet said were sometimes out of context and fragmentary.

It does seem clear, however, that — regardless of which quotes were used — Darwin’s thinking on species was different from Mayr’s. As opposed to the bright lines that divide Mayr’s species, Mallet said that Darwin saw more of a continuum of differences, accumulating between different populations.

Mallet questioned how real the concept of species is in nature, saying that there are many examples of groups within the same species that are very different, and of different species that can — and do — mate and produce viable hybrid offspring.

The larch budmoth, for example, Mallet said, has two different “races” that are considered the same species. The two races, however, live on different host plants, one on larch, a conifer that sheds its leaves, and another on pines. They have different lifestyles, but the adults look very similar and they do hybridize. The pea aphid is another example, he said. The pea aphid, a single species, has several different races that live on different kinds of pea plants, but they live in the same area and hybridize.

Mallet offered other examples from snails to fish to birds to mammals, pointing to inshore and offshore forms of bottlenose dolphins and resident, transient, and offshore populations of killer whales. Even the world’s largest-ever animal, the blue whale, hybridizes with another ocean giant, the fin whale. One of these giant hybrids was caught and found to be pregnant.

“I think it’s clear from Darwin’s continuum of biodiversity, going from local variation and polymorphisms through … geographical races, hybridizing species, [distinct] species, and then genera, that the continuum is actually there,” Mallet said. “Darwin’s message was, ‘Look, this continuum says speciation is happening all the time, speciation is popping up everywhere.’”