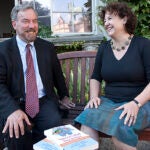 What makes a successful society?

Harvard researcher Dave Boufford offered a strange description of a plant, even one whose bulky, knobby flower proved partly resistant to the pressing and drying process through which botanical samples routinely go.

“They look like little animals sitting on rocks,” he said.

Boufford, a senior research scientist, was standing on the fourth floor of the Harvard Herbaria, between the rows of tall green metal cabinets that hold the Herbaria’s collections, famed for their extensive representation of Asian plants.

Moments earlier, he had opened a cabinet midway down the aisle in the nearly deserted stacks and had begun pulling out folders filled with specimens from a remote region of China, hard by the Tibetan border.

In the folders were a greenhouse plant with nearly translucent leaves that cover its flowers, creating a warm oasis in the high-altitude chill for pollinating insects; the starfish-like Saussurea stella, whose purple-tinged leaves lie close to the ground; and its relative, Saussurea medusa, much larger and coated with furry-looking fine hairs, which prompted Boufford’s double take when he encountered it in the field.

“Why is it so hairy? Some thought it was to keep the plant warm, but right next door are plants without hairs,” Boufford said.

This minor mystery is just one of many that remain unanswered in the place these plants call home: the remote Hengduan Mountains of China.

A dramatic, high-altitude region of breathtaking views, steep valleys, and incredible biodiversity, the Hengduan Mountains are part of a larger area considered a global biodiversity hotspot. The nonprofit group Conservation International calls the mountains of southwest China the most biodiverse temperate region in the world, home of the giant panda, the golden monkey, and 3,500 endemic plant species.

It is the plants that draw Harvard’s Boufford, who began collecting in the region in the mid-1990s. In 1998, Boufford, the Arnold Arboretum, and the Harvard University Herbaria struck up a research collaboration with several Chinese institutions, including the Kunming Institute of Botany and the Institute of Botany in Beijing. The partnership has proven beneficial to both sides. The National Science Foundation and Harvard provide funding, which is often scarce for such purposes in China, while Chinese scholars provide access to parts of the country to which Westerners may have difficulty obtaining travel permission. The financial investment has helped bring in additional dollars, prompting matching funds from the Chinese National Natural Science Foundation.

Together, the project’s Chinese and American scientists have collected between 120,000 and 150,000 specimens representing 6,000 species. Over the project’s course, they’ve identified 30 new species of plants and fungi and created an online database of images and descriptions useful for scholars around the world. One of their goals is to define the hotspot’s boundaries, by finding places where biodiversity drops fairly quickly. Boufford said some of the diversity may be tied to rainfall, since they have observed what he described as “fingers of diversity” running with the rain patterns up mountain valleys.

As a companion effort, Susan Kelley, the project’s longtime manager who last spring moved to the Wyss Institute for Biologically Inspired Engineering, has created an online gazetteer of Chinese place names. Boufford said the gazetteer is a critical resource in figuring out where past specimens were collected, in a time before global positioning systems and in a region where international researchers have transliterated names differently over decades of collecting.

Once gathered and processed, the specimens not only augment collections at Harvard and the host Chinese institutions, but are shared with researchers around the world in a collaborative exchange that trades specimens for expert help identifying them.

Zhu L. Yang, a mycologist at the Kunming Institute and a collaborator of Boufford’s since the late 1990s, said the expeditions bolster collections gathered from the region in the 1970s and ’80s, which in some cases were poorly preserved and are unsuitable for modern scientific study.

“Working conditions were very hard and the equipment for drying specimens very simple and poor — they usually dried specimens with fire directly in the field,” Yang said. “Consequently, the specimens were in most cases poorly preserved and can’t serve as materials for current scientific studies. Through conduct of this project, we can go to many distant and inaccessible places to collect specimens. This is especially important for current molecular biological investigations. If you have no specimens of high quality, you can’t get reliable scientific data.”

Boufford and colleagues are following up on the Chinese travels of Joseph Rock, a botanist who collected in the region for decades in the early 20th century. Rock worked for several scientific institutions, including Harvard’s Arnold Arboretum, for which he collected 20,000 specimens in 1924.

The project has recently shifted its Harvard home. After being based at the Arnold Arboretum for more than a decade, in July the project, along with Boufford, moved over to the Harvard University Herbaria.

Boufford has focused his efforts on the interior of the Hengduan Mountains because Rock collected from their periphery. The area’s biodiversity is even more remarkable, Boufford said, because its elevation is so high. The region they collect from averages 14,000 feet, with a growing season of just three months.

The mountains are the birthplace of several of Asia’s principal rivers, including the Yangtze, which flows through China; the Mekong and the Salween, which flow through several countries in Southeast Asia; and the rivers that join to form Burma’s Irrawaddy. The result, Boufford said, is terrain that is quite variable. The upper Yangtze, for example, flows through a gorge at 6,000 feet between mountains that tower to more than 18,000 feet.

The result is a profusion of environmental conditions in a very small area. The terrain in low canyons can be almost desertlike, with naturalized cacti from the Americas, while other areas hold rich forests, expansive meadows, and, above tree line, squat plants characteristic of alpine areas.

A field season lasts roughly two months and requires more months in the laboratory to process and identify the specimens. Richard Ree, assistant curator of botany at the Field Museum in Chicago, wrote his doctoral dissertation about specimens gathered while working with Boufford. Ree, who received his doctorate from Harvard in 2001, participated in several field seasons from 1997 to 2000, and then continued to collaborate with Boufford after graduating, right through last summer’s trip.

Ree, Boufford, and Kelley described field conditions that have varied widely over time. Initially, the roads were in such poor shape — with 1,000-foot drop-offs — that Boufford was certain someone would eventually die on them. They’ve improved considerably since, however, as the Chinese government seeks to open Tibet to tourism and settlement by Han Chinese. A trip that used to take seven or eight hours can now be done in just an hour and a half, they said.

Along with the travel improvements, however, have come more people, with the accompanying need to lodge and feed them, meaning more yaks and goats grazing, and more searchers collecting plants for medicinal purposes.

“It’s quite remote,” Kelley said. “Yet, at the same time, just when you think you’ve stepped on ground nobody ever stepped on before, there’s a Tibetan.”

Sleeping conditions have also varied widely on the collecting trips, from tents and sleeping bags in the field to more comfortable accommodations at new hotels.

The group of American and Chinese colleagues generally gets moving early in the day. Researchers pile into several cars that head in different directions. Once they reach their destinations, the collectors hike in various directions, gathering several specimens of each type of plant they find before rejoining colleagues at the car at day’s end. In their travels, researchers have to be prepared for mountain weather, which can be warm enough for shirtsleeves, and cool enough for pounding hail a short time later.

The trips have fostered friendships and professional respect among researchers in the two nations. Yang has visited Harvard three times to examine the fungal collections, books, journals, and papers at the Farlow Herbarium. He also has sent his doctoral students here twice and has fielded requests from American mycologists for materials from the Hengduan Mountains.

The main collaborator for vascular plants, Professor Hang Sun, and six of his students have also visited Harvard to study the Herbaria’s rich collections of Asian specimens and literature. Nine students from China have earned doctoral degrees through their direct involvement in the project.

For the researchers, the payback is not just the incremental advance of scientific knowledge and the relationship building among scientists of two nations, it is also the personal experience of working in one of the world’s most beautiful places. Kelley described the terrain as “dream geography” and Ree and Boufford said the mere act of lifting one’s eyes is rewarded with awe-inspiring views of snow-capped peaks and glaciers.

“It really is a dramatic, breathtaking landscape,” Ree said. “You don’t ever get used to it.”