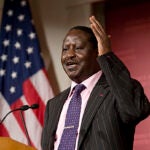 Greeted with both praise and protest, Álvaro Uribe, president of the Republic of Colombia, expounded on his administration’s accomplishments in a speech at the John F. Kennedy Jr. Forum on Sept. 25. By turns presenting himself as a solemn academic, a charismatic statesman, and a shrewd politician, Uribe underscored his role as one of Latin America’s canniest leaders in a country wracked by violence from drug traffickers and insurgent forces.

Uribe, elected president in 2002 and 2006, said his administration had enhanced a key component of Colombia’s progress: confidence. He called for more investment, greater social cohesion, and “security with democratic values” to continue building this confidence. He also adroitly sidestepped questions about why he is running for a third term.

For Uribe, the speech was a return to a campus where he earned a certificate of special studies in administration and management from the Harvard Extension School. Security was tight, and a handful of protesters gathered outside of the Kennedy School, decrying Uribe’s bid for a third term as president. Earlier this month, the Colombian Congress approved a voter referendum that would allow Uribe to run again, despite a constitutional ban on presidential re-election to a third term.

The gray-haired, bespectacled Uribe began the evening in measured, almost professorial tones as he detailed his administration’s success in decreasing violence, increasing investments, and improving education. Speaking in English and punctuating his points with frequent jabs to adjust his glasses, he noted that during his administration, investment rates rose from 12-14 percent to 25-28 percent.

Freedoms have been restricted but not by government choice, he said. “Freedoms were restricted because of the advance of the terrorist groups,” he explained. He also pledged to improve relationships between the armed forces and rural communities.

Uribe, who was awarded the U.S. Presidential Medal of Freedom in January 2009, said that old perceptions of left and right are obsolete, and that Latin American countries “need to promote democratic values for our democracies to become the most modern in the world.

Audience members tried various ways to question him about his possible third term. Asked if was he risking Colombia’s democracy by running again, Uribe spoke of the country’s need for capable, committed leadership. Voters will decide the referendum. “My own destiny does not depend on me,” he said.

Another questioner tried a sly approach, asking, “What will be your advice to the person who shall replace you as president in less than a year’s time?” This sparked a huge surge of laughter.

In response, Uribe spoke of his father’s death, and how it might have affected his political career. Uribe’s father was killed in 1983 by the insurgent Fuerzas Armadas Revolutionary Armed Forces of Colombia, or FARC.  “But take into consideration that 50 percent of Colombian families have suffered this (kind of) tragedy,” he said. “I have one goal: to liberate a new generation [from] this nightmare.”

“ I cannot advise my successor,” he declared in ringing tones. “Advising successors has created problems in Colombia and here in the United States. I want to advise the voters like you. My advice to voters is to give this policy the opportunity to continue in our country. Security with freedoms. Investment and social responsibility and social cohesion. What I can do is just advise the voters.”