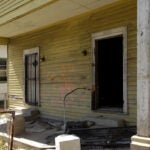 This is what the John F. Kennedy School of Government (HKS) is all about, said HKS Dean David Ellwood of a Sept. 2 public service program. “It’s about service, it’s about making the world a better place, it’s about thinking about something larger than yourself.”

The evening conversation at the John F. Kennedy Jr. Forum, moderated by David Gergen, focused on the public service work of four HKS alumni. During the informal discussion the graduates elaborated on their careers and their time at HKS.

“I love getting up in the morning,” Wivina Belmonte, director of communications for UNICEF, told Gergen, HKS professor of public service and the director of the School’s Center for Public Leadership.

Belmonte worked for years as a journalist for the Canadian Broadcasting Corp. But as the world of journalism changed, she said, she realized the change she wanted to be part of involved something else. She joined UNICEF in 2001. Belmonte called her second career “deeply satisfying.” Working on issues like AIDS awareness and children’s rights with colleagues who are committed to the same mission is “what carries you through,” she told the crowd.

A faulty grenade played a large part in the career path of Ray Jefferson. While on a training exercise in the fall of 1995, Jefferson, an Army officer, discovered he was holding a ticking bomb. With nowhere to safely throw the live grenade, he chose to smother the defective device to protect his men. The decision cost him the five fingers of his left hand, but the tragedy inspired the West Point graduate to look for a life beyond the military.

“One of the things I realized about myself was that I loved leadership; I loved helping people in organizations achieve their potential and overcome challenges.”

Jefferson, who holds degrees from HKS and the Harvard Business School, has worked in both the private and public sector, and is currently assistant secretary for the Veterans’ Employment and Training Service at the U.S. Department of Labor.

He encouraged the HKS students in attendance to make the most of their time at the School by enrolling in classes across the University and developing relationships with professors — people they could continue to network with and engage well after graduation.

“Meet the professors, meet the people who have deep expertise in areas that you are interested in. … Make it a living, lifelong experience.”

Cody Keenan, a speechwriter for President Barack Obama, admitted he got into public service for all the wrong reasons.

“You learn this is about people’s lives,” said Keenan, who was also inspired by Kennedy’s tireless efforts on the floor of the Senate championing social causes. “That’s why I came here, straight from his staff, because I really wanted to get into [service].”

Margita Thompson, the lone panelist currently in the private sector, made the case that good works can also be done in the for-profit world. After working as the press secretary for California Gov. Arnold Schwarzenegger, Thompson moved to the health insurance company Health Net Inc., where she is vice president of corporate communications.

Working for a health care company is all about public policy, she said: “You just happen to be working in the private sector.”

Before the event began, Ellwood asked for a moment of silence to honor Kennedy, who died Aug. 25 after a battle with brain cancer.