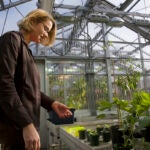 Growing her own answers

One hundred and fifty thousand species down, 1.65 million to go.

That is the tally for the online Encyclopedia of Life, an ambitious two-year-old project with the goal of nothing less than documenting in one place all of the 1.8 million known living species on Earth and making the information available to everyone with Internet access.

The effort is being mounted by Harvard and five other cornerstone institutions: the Smithsonian Institution, the Marine Biological Laboratory, the Missouri Botanical Garden, the Field Museum of Natural History, and the Biodiversity Heritage Library, itself a consortium of 10 major natural history libraries, including two from Harvard.

The Encyclopedia of Life (EOL) passed several major milestones in August, including the 150,000 species pages mark and $12.5 million in renewal funding from the MacArthur and Sloan Foundations. EOL also announced that its overall architecture is 75 percent complete, with placeholders for up to 1.4 million species.

Agassiz Professor of Zoology and Museum of Comparative Zoology (MCZ) Director James Hanken serves as the chairman of the EOL’s Steering Committee. He said the effort has gained steam as different Web sites providing species information began to ask if their material could be represented on EOL. The result has been a growing sense that EOL could serve as a portal for those interested in finding out about life on Earth, an entryway that not only contains species descriptions and images, but that also provides links to a wide array of resources available on other Web sites.

“It’s natural for people to think of this exclusively as a biodiversity site, but it also provides a portal to comprehensive information for all species,” Hanken said.

Marie Studer, who heads EOL’s MCZ-based Learning and Education Group, said it is critical that the public, researchers, and other users know that EOL’s information is accurate, so each entry is vetted by experts. Despite that, Studer said EOL is intended to be highly participatory and provides ways for citizen-scientists to contribute. Images or text can be added by anyone, but they go onto the site with a yellow background that indicates the material has not yet been reviewed by an expert. Those seeking information can adjust a slider bar for how authoritative they want the information to be, showing just expert-written content or everything.

More than 30,000 still images and video have been uploaded to the EOL by tools that have been added to the site allowing public contributions.

Some funding organizations believe that the EOL can be an instrument for scientific discovery as well as a repository of information. The Ellison Medical Foundation has funded an effort by Holly Miller at the Marine Biological Laboratory to relate EOL information to medically relevant concepts, which would allow researchers to organize and extract information such as relative life spans of different species. It is the beginning, Hanken said, of an effort that could allow EOL to be used to illuminate broad, cross-species biological trends.

“Some patterns and phenomena are discernible only when viewed from afar,” Hanken said.

EOL is already being used for education. Instructors at four universities, including Harvard, are having students create species pages as part of class projects.

“It’s about contributing to a real-world project. If the students do their job properly, it will go online,” Hanken said.

Part of the project involves linking to important past research, such as scientific papers in which species are first described. A large amount of material is being digitized by the Biodiversity Heritage Library, which has access to a vast collection of biodiversity-related material in member libraries.

“The point of EOL is to be as flexible as possible. We don’t know what the end user wants to use it for,” Studer said.