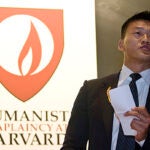 Kenya’s prime minister expressed optimism about the democratic future of Africa on Thursday (Sept. 24), saying that the era of African “big man” dictatorship is coming to a close and expressing hope that the coming decades are marked by a flowering of the African continent.

“Africa is not condemned to poverty. I believe strongly that we can transform the 21st century to be the ‘African Century,’” said Raila Odinga, named prime minister in a power-sharing agreement following Kenya’s controversial 2007 presidential election.

Odinga, who spoke at the Harvard Kennedy School’s John F. Kennedy Jr. Forum, was introduced by Kennedy School Dean David Ellwood, who described Kenya as a beautiful land, but one with challenges as well as opportunities.

Kenya’s long reputation as one of Africa’s most stable countries took a hit after the 2007 elections, in which Odinga challenged incumbent President Mwai Kibaki. Official results showed Kibaki retaining the office, but Odinga, his supporters, and independent observers concluded that the election was marred by fraud. This touched off postelection violence that targeted members of Kibaki’s Kikuyu tribe. More than 1,000 were killed and hundreds of thousands displaced from their homes. In one particularly horrific incident, 35 people were burned to death in a church in Eldoret.

The event was sponsored by the Institute of Politics, the Center for International Development, and the Poverty Action Lab at the Massachusetts Institute of Technology.

During his talk, Odinga acknowledged that Kenya’s road to multiparty democracy is not yet complete. In response to one audience member’s question, Odinga said he didn’t recommend taking Kenya’s path to democracy, since he, as the likely winner of the last presidential election, has been forced into a power-sharing agreement with the probable loser.

Still, Odinga said he sees multiparty democracy spreading across the continent together with a growing realization that it will be through investment in infrastructure and in the African people that the continent develops, not through outside aid. Much of the aid sent to Africa over past decades was wasted, he said, enriching the elite while doing little to improve the lot of ordinary Africans. In more recent years, since true democracies began to take root, economic development improved, with an average growth rate on the continent of 5 percent over the last decade.

Even as democratic institutions took hold, there were setbacks, Odinga said, with sitting leaders resisting election results and changing constitutions to improve their chances of staying in office. He described the current phase as “transitional” but insisted that true democracy is in Africa’s future.

In Kenya, Odinga said, several things are happening to bring that future to reality. The government has created several truth and reconciliation panels to deal with past election violence. In addition, it is investing in information technology and trying to improve four factors that discourage outside investment: poor infrastructure, excessive bureaucratic red tape, lax security, and corruption.

“Those are the enemies of direct foreign investment,” Odinga said.

Odinga’s vision of an African future, however, extends beyond Kenya’s boundaries. He described himself as a “pan-Africanist,” who supports a politically united Africa and who is working toward a federation of five East African nations, Kenya, Tanzania, Uganda, Burundi, and Rwanda, called the East African Federation.

“I am a pan-Africanist and an afro-optimist, as opposed to an afro-pessimist, those who have given up on Africa,” Odinga said. “I believe truly the future of Africa is one.”

Odinga drew comparisons between Kenya and South Korea, which had similar levels of poverty, per capita income, and literacy rates when Kenya won independence more than four decades ago. Today, he said, South Korea’s economy is 40 times bigger than Kenya’s.

“What is it that Koreans did right and Kenyans did wrong? The Koreans were able to mobilize human and natural resources for economic and social development,” Odinga said. “Africa, the richest continent in terms of resources, is also the poorest.”

During colonial times, Odinga said, Africa’s resources were plundered to enrich other nations. Further, because of mismanagement since independence, today’s Africans are saddled with debt incurred by past leaders.

Odinga blamed ethnic violence on the nation’s leaders and its elite. In their struggle for power, leaders mobilized their most natural power base — the tribes they were born into. Once in power, favored jobs and economic development flowed to their tribal members, making those in other tribes feel they have to get their own person in office to gain some advantages. Leaders, he said, must de-emphasize tribalism for ethnic splits to heal.