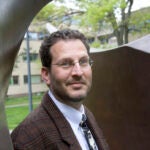 The numbers paint a grim picture.

Graduation rates are dismal for many areas of the country. In the 50 largest cities in the United States, only 52 percent of students graduate from high school.

Internationally, the nation still lags well behind. A recent assessment of math and science literacy for 15-year-olds from 30 industrialized countries found the United States ranked No. 25 and No. 21, respectively.

And the achievement gap — a national performance disparity between white and minority students — still defies attempts to eliminate it.

Across the education sector, there are calls for reform. But sweeping reform will require a new generation of leaders who are as well versed in education issues as they are in the ways of management, according to many education experts.

“Education is the civil rights issue of this time because it provides access to the American dream; you can’t be successful in America without an education,” said Kathleen McCartney, dean of the Harvard Graduate School of Education (HGSE) and Gerald S. Lesser Professor in Early Childhood Development.

Together HGSE and Harvard are helping lead the way for change.

A new initiative, based at HGSE in collaboration with faculty from the Harvard Business School (HBS) and the John F. Kennedy School of Government (HKS), aims to radically transform the American education system. In the fall of 2010, 25 men and women will arrive at Harvard for a three-year, practice-based advanced degree. They will graduate with a tuition-free Harvard doctorate in education leadership (Ed.L.D.).

The program also will foster a network of education professionals and organizations who are working to transform education.

“You want the very best people, with good networks that they can reach out to when they need help or support in trying to solve really difficult or challenging problems,” said Heather Anichini, vice president for career leadership initiatives at Teach For America, who was on campus this past spring with representatives from about 20 other potential partner organizations to discuss the new Harvard degree.

“This program really creates that kind of national, cross-sector, cross-organizational network for people.”

Teach For America, founded in 1990 by Wendy Kopp, who developed the idea for an organization that trains recent college graduates to work as teachers in low-income schools as her college thesis, has 17,000 alumni. More than 60 percent of them continue to work in the education sector, according to Anichini, and many of them complain about the lack of training opportunities for people who want to take on system-level leadership roles in education.

The problem cuts both ways.

Harry Spence, HGSE professor of practice and lecturer on education at HKS, used the example of the effort to overhaul the New York public school system to illustrate another reason the new HGSE program is so critical. Several years ago, Joel Klein, the newly appointed chancellor of the New York City Department of Education, was eager to find talented people to help run the city’s massive public school system. Looking for top management skills, he turned to the nation’s leading consulting firms.

“I think Joel would agree that today, a number of years later, they lost crucial time because they did not have enough people who had both a deep knowledge of education and the management skills he was seeking,” said Spence. “Our goal is to produce a steady stream of graduates with both skill sets.”

Using a multidisciplinary approach, involving faculty from HGSE, HBS, and HKS, the degree incorporates training in education, management, and leadership, as well as politics and policy. The interfaculty component is fundamental to the leadership degree, said its developers.

“The faculty work as an integrated team,” said Elmore, “to model the teamwork we expect students to model in their own leadership practice.”

How does a large, complicated, entrenched field change, and how do individuals standing on different platforms cause that change to happen, asked Mark Moore, a member of the degree planning committee.

“If you try to address that from any one particular perspective you would probably make pretty significant errors.”

Moore is also Herbert A. Simon Professor in Education, Management, and Organizational Behavior at HGSE and Hauser Professor of Nonprofit Organizations at HKS.

His principal interest since coming to Harvard has been in professional education. But the question of how to effect systemwide change, he said, “could only be answered by an interdisciplinary faculty.”

The first year’s curriculum is organized into three strands: the education sector, learning and teaching, and leadership and management. The doctoral program will involve some traditional classroom work, but typical courses will be replaced with newly created learning modules that vary in length and scope depending on the topic. The work will also be heavily action-oriented. Students will spend time in teams working on projects and simulations, as well as in school systems helping diagnose and solve specific problems.

“They have to be able to execute good ideas,” said the program’s Executive Director Elizabeth City, who compared the new degree’s learning experience to that of a medical student who receives practical training with patients.

“This is a very action-oriented type of pedagogy; it is much more oriented towards action and hands-on work.”

“You can’t just do it in the classroom,” agreed Spence of the new curriculum. “The training has to include experience and practice and time to reflect with researchers and academics about how the process of change is effectively carried out.”

Participants will customize their second year to fit their individual interests and will select classes from across the University that relate to their particular leadership focus.

In their final year, students will be placed in a residency with one of several partnering organizations including nonprofits or for-profits with an educational mission, or government organizations geared toward education reform. There they will plan and implement an initiative that is part of that organization’s own effort at transforming education.

While school departments and districts are still essential agents of change, other key players in the education sector now include nonprofits such as Teach For America and New Leaders for New Schools, which trains educators to become principals of urban public schools. In addition, mission-driven companies in the for-profit sector, as well as government groups, charter schools and networks, and philanthropic organizations are all using unconventional ways to solve the problems with the American education system.

“All of these public, private, for-profit, not-for-profit organizations are playing an increasingly important role in the [education] debate; in structuring the alternatives; in providing the support services that are going to determine the outcome. All of them need leaders,” said Marc Tucker, president and CEO of the nonprofit National Center on Education and the Economy, another organization partnering with Harvard in the new degree.

Such organizations will work in collaboration with Harvard throughout the program and will play an integral role, serving not only as a training ground for the new generation of leaders, but also as innovators of reform.

“We will be working with them in a very collaborative way to both help them be more effective in their work in the moment, and to learn from them about what they are doing,” said City. “We are thinking of them as places that will host our students for the third-year residency, but also as places that we will draw on for the curriculum.”

Students who are accepted to the program won’t have to worry about how to pay for it. The new degree is tuition-free and will be supported through grants from organizations, including the Wallace Foundation, as well as from individual donors. The decision is a bold effort by the program’s creators to attract top talent in part by eliminating a heavy financial burden.

“We are trying to remove the barriers to access in the same way that Harvard tried to remove barriers to access for undergraduates — because it’s the right thing to do and because we want to get more of the best and the brightest,” said McCartney, adding, “We feel like we are on a mission here, and it’s very exciting. We don’t plan to disappoint.”