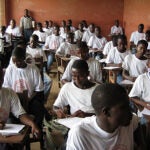 Bringing science back to Liberian classrooms

New course examines disasters from the inside out

Doug Ahlers talks about his new course at Harvard in medical terms.

“Essentially,” he says, “it’s the anatomy of a disaster.”

Ahlers is a fellow at the Belfer Center for Science and International Affairs at the John F. Kennedy School of Government (HKS), and the disaster is Hurricane Katrina, one of the deadliest in United States history.

Packing 125 mph winds, the Category 3 hurricane ripped into the Gulf Coast in August 2005, carving a path of destruction from Florida to Texas. Hardest hit was New Orleans, where levees designed to deal with the surging storm waters failed, leaving large sections of the city submerged.

The images were riveting: people stranded on rooftops waving for rescuers; families lined up, waiting endlessly for buses to take them to drier ground; bodies floating in flooded streets. The government’s response to the disaster was sharply criticized, and, four years later, questions are still being raised about what went wrong.

Together with his students, Ahlers is looking for answers.

By exploring all aspects of the event in his course titled “Disaster Recovery Management and Urban Development: Rebuilding New Orleans,” Ahlers, HKS adjunct lecturer in public policy, plans to give his students a deeper understanding of the problems that were evident both before and following Katrina, and suggestions for how to better prepare for and recover more quickly from future disasters.

“We are basically going to dissect a cadaver; look at all the recovery plans and efforts, examine what the federal government did, what the state did, what the city did, what neighborhoods and nonprofits did. … A lot of it is looking at our federal programs and policies in place and examining different approaches going forward.”

The course builds on the existing relationship between the Kennedy School and New Orleans. Immediately following Katrina in the fall of 2005, HKS faculty, students, and staff headed to the area to aid in the recovery effort.

“It was such a huge crisis disaster but also a bungled policy disaster. Obviously the Kennedy School needed to be involved in some way; we couldn’t just sit on the sidelines,” says Ahlers, who was part of the early team — guided by HKS Dean David Ellwood — that traveled to the city to offer policy help and assistance in drafting initial recovery plans.

But the group soon realized they wanted to have a broader, lasting impact, so they decided to adopt a neighborhood. They selected Broadmoor, an area hard hit by the floods and with a diverse demographic. Their goal is to provide a multiyear commitment to the neighborhood to help it address all of its recovery needs, from creating its own recovery plan to the development of a new charter school.

Participants in Ahlers’ course will put their classroom efforts directly into practice in New Orleans. In the spring, student teams will spend two weeks in Broadmoor implementing a variety of projects developed during the fall semester, including a blight elimination strategy and the development of a neighborhood statistics program, a type of reporting system to measure how well the neighborhood is addressing quality-of-life issues like broken lights and clogged drains, among other concerns.

“It’s a rare opportunity for students to work in the heart of New Orleans in the midst of a disaster recovery and take advantage of this unique window that the Kennedy School has into this experience,” says Ahlers. “You can take everything you learn in the Kennedy School and then apply it in the field.

“That’s not something that you can phone in,” he added. “It takes a real commitment in terms of time and energy and emotion.”

Ahlers says HKS waited until now to create the course because they “needed distance and time from the event. … It’s hard to study an event that is still unfolding.”

The course is part of the larger Acting in Time initiative at HKS, a program created in 2007 by Ellwood, who is also Scott Black Professor of Political Economy, to identify effective public policy strategies for looming large-scale public problems.

In January, Ellwood together with Christopher Stone, Daniel and Florence Guggenheim Professor of the Practice of Criminal Justice who is also faculty director of the University-wide Hauser Center for Nonprofit Organizations and faculty chair of the Program in Criminal Justice Policy and Management, will teach a similar course on how governments can act in time to avoid a variety of disasters.

Describing the fieldwork component of his new course, Ahlers uses another medical analogy.

“We worked with Broadmoor through the triage stage, when you are just trying to save the patient. Then we worked through the ICU stage. The neighborhood has also gone through the hospital bed/recovery stage. It’s now in the rehab/physical therapy/teaching-them-how-to-walk-again stage.”