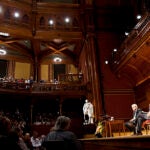 The story behind ‘A New Literary History of America’

The Humanities Center at Harvard is staging a symposium this weekend on the publication of the 1,095-page “A New Literary History of America” (Belknap Press of Harvard University Press 2009). A centerpiece of the symposium was today’s (Sept. 25) “20 Questions” panel with the book’s editors, Greil Marcus and Werner Sollors, and moderated by Humanities Center Director Homi Bhabha, Anne F. Rothenberg Professor of the Humanities.  Sollors is the Henry B. and Anne M. Cabot Professor of English Literature and professor of African and African American Studies at Harvard University.

The book is far from a typical anthology. Containing 216 original essays that cover the five centuries of this country’s history, politics, science, philosophy, music, art, film, and, yes, literature, it starts in 1507, with the first time the name America appears on a map, and ends with the 2008 election of Barack Obama. What comes between is eclectic, to say the least, ranging from Dr. Seuss to Bob Dylan, President Kennedy’s inaugural address to the first issue of Life magazine, the release of Alfred Hitchcock’s “Psycho” to the advent of the telephone, the composition of Chuck Berry’s “Roll Over Beethoven” to the publication of “Moby-Dick” (not necessarily in that order, of course). “Things that were made in America for America,” as Marcus put it.

How do these things fall under the category of literature? “The borders of the literary have to do with the telling of a story,” Marcus said, “where that story begins.” The invention of the Winchester rifle, for example, “becomes the beginning of a thousand stories. It enters the iconography of the nation and becomes part of everybody’s frame of reference.” As in modern American culture at large, said Sollors, “the notion of the literary is broadened. … I don’t think we’re in some avant-garde of pushing the literary farther than it has come.”

Though the book does move chronologically, the editors pointed out during the panel discussion that they resisted the traditional format of dividing their anthology into discrete time periods. “The relevance of history is embedded in the form of each essay,” said Sollors, “but it’s not an implicit requirement.” That is, added Marcus, the idea is planted and the writers and editors “trusted the reader” to understand the flow of history without the need to spell it out. “I think periodization has gained specious validity over the last 40 years,” he added later. “I don’t think it necessarily tells us what we need to know.”

Another unusual approach the book takes, the editors noted, is that it does not seek to present the definitive essay on a given topic; rather, Marcus and Sollors chose writers based on the question, “Who do we want to hear from?” They didn’t choose the writers and then try to fit them with essay subjects. “The balance is all the way toward the text,” Marcus pointed out, “not the author.”

He said that as the arrived at their final table of contents, he and Sollors, along with a 12-member advisory board, asked themselves, “Who will approach this [topic] in a way that we never would have expected?”

They also chose the subjects covered not necessarily from culture’s most famous episodes, but rather by looking for “the moment that turned an idea, raised a possibility that wasn’t there before,” said Marcus. “This was not an encyclopedia. It was an attempt to write down something that was not there before then suddenly was.”

“We never intended to create a canon or bash an existing canon,” Sollors continued. He explained that for awhile the publishers were considering adding a “tag line” to the title, and one that occurred to him was “What if they gave a culture war but nobody came?”

The editors agreed that they never felt they were sacrificing any formally literary entries to make room for those that might fall more neatly into other cultural categories. They winnowed the field down from an initial 400 topics to choose those that would “look at certain events afresh from an unusual angle,” said Sollors, thereby giving readers a curiosity about the subjects that might send them off on an intellectual journey to learn more. “It’s like a delightful selection of appetizers that invites readers to the main point,” concluded panelist and Harvard Professor Lawrence Buell, Powell M. Cabot Professor of American Literature.