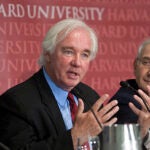 A few yards from Matthews Hall in Harvard Yard, undergraduates from Anthropology 1130 this semester are in search of 17th century artifacts from Harvard’s first brick building. It stood nearby from 1655 to 1698 and housed the first printing press in the Colonies.

The building was also home to the Indian College. The Charter of 1650 dedicated Harvard “to the education of the English and Indian youth of this country, in knowledge and godliness.”

While students dug holes and sifted dirt in search of the 17th century, a few blocks away the Harvard Kennedy School (HKS) was celebrating American Indian nations of the 21st century.

Honoring Nations 2009 was a symposium (Sept. 16-18) intended to highlight innovations in tribal governance: programs that revive and reinforce sovereignty, institutions, culture, and traditional leadership among the 560-plus Indian nations with U.S. borders.

A morning address on Sept. 17 had a hopeful message: American Indians have a voice in the White House, and the attention of the new president. “We don’t have to keep going over those points” about the efficacy of tribal sovereignty, said Jodi Archambault Gillette. “We can fast forward to the solutions part.”

The onetime Sioux powwow dancer from South Dakota is now deputy associate director of intergovernmental affairs in the Obama administration. It’s part of the Office of Public Engagement — what Gillette called “the front door of the White House.”

The symposium was sponsored by the Harvard Project on American Indian Economic Development, part of the HKS academic family. It was founded in 1987 with the help of the Ford Foundation and administers the Honoring Nations project, a national awards program.

HKS Dean David Ellwood, addressing a morning session on Sept. 17, called the project, co-directed by HKS economist Joe Kalt, “one of our real jewels” — a font of scholarship and insight over the years “that can enlighten the world.”

The program has given tribes a way to share best practices related to health, education, government reform, traditional language, and Native culture. It is “an affirmation of self-determination,” said Steve Cornell, co-director of the Harvard Project on American Indian Economic Development.

From the beginning, even “nerdy professors” who studied Indian tribes kept turning up the same result, agreed Kalt. “The only policy that’s ever worked is self-determination.”

Honoring Nations is shorthand for Honoring Contributions in the Governance of American Indian Nations. It is part of an innovation-sharing consortium of indigenous tribes worldwide, from Brazil and Chile to China, the Philippines, Africa, and Australia. The innovations that Honoring Nations promotes always draw international attention. “The world is watching,” said Cornell.

The best practices that emerge from Honoring Nations are what Gillette called “the solutions part” — and that it is more vital than ever to share. “We have a lot of work to do,” she said of renewed White House attention to tribal affairs, “and we need your help.”

In two days of panels, the success stories came out. Among them: a skilled nursing facility in Tucson, Ariz., that embraces family culture; the Chickasaw Press in Oklahoma that publishes books from within the tribe; and a Muscogee Creek Nation (Oklahoma) program that reintegrates former prison inmates with jobs, housing, counseling, and spiritual guidance.

Indian nations need science and technology, and need to share what is new and what works — “but getting good governance without spirituality will not last,” cautioned Manley A. Begay, Ed.D. ’97, co-director of the Harvard project.

He delivered the symposium’s first invocation Sept. 16 to registrants gathered at the Sheraton Commander Hotel near Harvard Square.

Beneath our very feet near the banks of the Charles River was once a sacred place to the Indians who lived near early Colonists, said Begay. “We are a people deeply rooted in place.”

Visit the Harvard Yard dig, said Curliss, whose Nipmuc Nation once spanned the interior of what is now Massachusetts. Embrace the long association of Native peoples with Harvard, he said, but be grateful for a spiritual heritage — the teaching of elders that “prayer is every moment of every day.”

Gillette agreed. “What makes us different,” she said, “are our core values.”

“Pay attention to the spiritual side of things,” said Oren Lyons during the symposium’s second day. “That’s where your power is going to be.” He is chairman of the Honoring Nations board of governors, and chief and faith keeper of the Onondaga Indian Nation in central New York.

It’s encouraging to see so many innovations “across Turtle Island,” he said, employing a Native American term for North America. But global issues are rushing in so fast that people everywhere, of all nations, will be hard-pressed to cope.

Climate change will alter natural systems, and population growth will burden them — bringing the potential for “suffering beyond all comprehension” at unnatural speeds, said Lyons. “Everything is accelerating. This is what we’re not designed for: acceleration.”

Embracing the spirit as well as science will help, he said — and picking good leaders.

Ellwood acknowledged Harvard’s early contributions to Indian education, and pointed to today’s 15 HKS students from American tribes. (University-wide, there are about 160 Native American students at Harvard.)

“This is about our chance to learn,” he said of the symposium’s lessons in good governance. “Thank you for honoring us.”