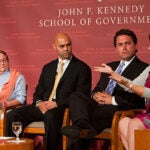 Justice — that elusive state of fairness and rectitude in human affairs — is a big concept to wrap your head around.

But four heads are better than one. Add in the head of English philosopher Jeremy Bentham (preserved in a box at University College London) and — OK — you are way ahead.

Four experts in political philosophy, whether as practiced or preached, grappled with the notion of justice this week (Sept. 8) during a public conversation at the John F. Kennedy School of Government.

The evening panel was the first public discussion of Michael Sandel’s latest book, “Justice: What’s the Right Thing to Do?” to be published later this month. (Sandel is the Anne T. and Robert M. Bass Professor of Government. His undergraduate course, “Justice,” has over the years drawn in 14,000 students.)

Joining Sandel were Niall Ferguson, Laurence A. Tisch Professor of History, and the William Ziegler Professor of Business Administration at Harvard Business School; Lani Guinier, Bennett Boskey Professor of Law at Harvard Law School; and author, columnist, and speechwriter Peggy Noonan, who this fall is a fellow at the Institute of Politics, which sponsored the panel.

The talking that ensued had the intimate feel of a high-level dinner table conversation, despite the venue (the John F. Kennedy Jr. Forum) and the 150 listeners. And like any good conversation, there was play, deliberate one-liners, friendly challenges, and laughter.

Thus the mention of Bentham’s preserved head, which is in secure storage after a series of thefts, the last of which included a football practice. The head — preserved by desiccation — was once the anatomical feature that allowed the precocious Bentham (1748-1832) to both study Latin at age 3 and to later develop the utilitarian school of philosophy.

Utility — Bentham’s idea that justice is what imparts the greatest happiness to the greatest number of people — is one of the three basic ways to explain justice, said Sandel.

Consent is the second, he said, and argued that justice depends on respecting individual rights and freedom.

The third approach to finding the core of justice — virtue — “seems quaint and ancient” today, said Sandel. But it should be the core idea, he added — that government and law are vehicles for promoting virtue itself, in the pursuit of a good life and the common good.

The history of political philosophy unfolds around these three ideas, said Sandel, and most of all around the first two, which in contemporary terms are the most familiar theories of justice in Anglo-American political traditions.

The coming book will try to rescue the idea of virtue as an underpinning for justice, explained Sandel. After all, virtue is a quality of mind and behavior that allows public debate and public policy to acknowledge that not all issues are morally neutral.

“Our most heated public debates are already about virtue,” said Sandel, offering the example of same-sex marriage, couched in a debate over “competing conceptions of virtue” — arguments over what kind of family units “are worthy of honor and recognition.”

Ferguson shot in with a rejoinder — that putting virtue foremost in the arena of justice only invites power by extremists. “I’m not sure you’re ever going to get me to be enthusiastic about virtue,” he said. “I just see [French Reign of Terror architect] Robespierre every time you use that word. At the bottom of republican virtues you send people to the guillotine.”

Sandel was quick to acknowledge that “imposing virtue” invites in the dark side of fundamentalist view. But though virtue “is dangerous,” he said, “it is also indispensable.”

The book’s goal, said Sandel, is first to see that such notions of virtue’s dangers are “disquieted,” and then to see that the idea of virtue is “saved” — that is, put back where it belongs, in the center of political debate.

Virtue is “avowedly judgmental,” he said — but it revives the “tradition of the common good” more than it does the specter of the guillotine. “Law cannot be neutral or nonjudgmental,” said Sandel. “It leads to an emptiness in our politics.”

Noonan, a one-time speechwriter for Presidents Ronald Reagan and George Herbert Walker Bush, praised Sandel’s book for its reminder that “we are mischievous, marvelous, complicated human beings” — and that justice is one of the conundrums we struggle with.

But for one, she said, “whenever I hear the word ‘justice’ I always want it to be coupled with the word ‘mercy.’”

And though justice is “one of the purposes of politics,” added Noonan, politics and its practitioners will always turn to what works. Noonan said any discussion of political philosophy, including rumination on the ideas of justice and virtue, will always be leavened by the press of real events, in real time. “Political figures are not philosopher kings,” she said.

Sandel and his three guests took on some other real-world debates that relate to the concept of justice, including health care, reparations for slavery, and the Wall Street bailout.

The idea of virtue belongs in these debates, in some way, said Guinier, a former U.S. civil rights attorney, who in the 1980s directed the voting rights project for the National Association for the Advancement of Colored People.  But it’s important that the idea of virtue at the same time “be practical and concrete,” she said, chiding Sandel. “Just the word itself bothers me. It sounds elitist and aristocratic.”

So “rethink the term ‘virtue,’” said Guinier, and embrace the idea that justice “cannot be deliberated or debated in the abstract.”

That means drawing history into the debate, said the law professor. “Justice has to take into account the historical forces [with] which people are living.” Take reparations for slavery, said Guinier: Virtue could propel us into a national debate on the issue of repaying American blacks for a past suffering that some experts today say is the cause of present suffering.

“I’m sympathetic to it,” said Sandel of reparations. After all, he said, a conservative’s vaunted “pride in the past” might include the idea of “taking responsibility” for the past, including its chapters of injustice. (“The practicalities of this,” countered Ferguson, “make nonsense of the idea.”)

And health care? Virtue belongs in the debate, said Sandel — and in fact President Obama “has lost the upper hand” by concentrating on the technicalities of national health care instead of its moral imperatives.

“The debate about health care could be a debate about justice,” said Guinier. “But it would be worthwhile to get concrete again” — by proposing a pilot system of free health clinics, for instance.

There are “counter moral arguments” within the national health care debate, said Noonan — including that deep federal expenditures today could saddle future generations with crippling taxes.

Perhaps health care requires all three of Sandel’s “vantage points” on understanding justice, said Ferguson: utility, since the present system “clearly can’t be defended” and hardly provides the greatest good for the greatest number; consent, since universal coverage is possible without violating individual rights — “without a British-style system of socialism”; and virtue itself.

The present American health care system, with its gaps in coverage, “cannot be accepted morally, in a meaningful community, in a real republic,” said Ferguson, turning to Sandel. “In your terms, in terms of virtue, it is not virtuous.”