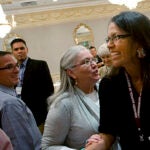 Lt. Dan Choi is not asking. He is telling.

In an appearance at Harvard last week (Sept. 17), the West Point graduate, Iraq veteran, and Arabic linguist told the story of his coming out this March as a gay man — and his campaign since then to repeal DADT, the military’s “Don’t Ask, Don’t Tell” policy.

DADT is shorthand for a 1994 federal law that allows members of the U.S. military to be discharged for the “propensity or intent to engage in homosexual acts.” Those who keep their sexual orientation a secret are allowed to serve.

Since 1994, about 13,000 gay soldiers, sailors, and Marines have been dismissed from the service, including more than 300 since the start of the Obama administration.

“I want to attack this issue on a moral basis,” said Choi, who spoke at an evening ceremony at Science Center D, where he received the first Service to Humanity award from the Harvard Humanist Chaplaincy. (The event, swarmed by a capacity crowd, was co-sponsored by the Harvard Gay and Lesbian Caucus.)

Requiring gays in the military to lie violates the many creeds that give American life its moral ballast, said Choi, a 2003 graduate of the United States Military Academy. DADT violates the idea of “freedom and justice for all” in the Pledge of Allegiance, he explained, and it contradicts a traditional West Point pledge: “A cadet does not lie.”

In his own life, being in the closet involved living a lie that violated his own Christian upbringing, added Choi, the son of conservative Korea-born parents. (His father is a Southern Baptist minister.) He recounted telling his mother, “I refuse to bear false witness against you.”

The military’s policy against “full personhood” for gays also gives credence to the kind of fundamentalism that stands at the heart of the war on terror, said Choi, whose combat tour was in 2006 and 2007. In Iraq, “religious minorities … were trying to hijack a government,” he said. “We were there against their fundamentalism.”

Back home, Choi awakened to “the same kinds of forces … hijacking a military [intended] for a common defense.”

Coming back from Iraq, at age 27, Choi had another awakening: the first love relationship of his life, and an introduction to what adult love brings. “Commitment, maturity, responsibility, sharing, growth,” he said. “Why should I have to lie about that?”

In June 2008, Choi transferred to the U.S. Army, New York National Guard. On March 20, 2009, he came out publicly as a gay man during an appearance on MSNBC’s “The Rachel Maddow Show.”

What followed was a sudden thrust into the spotlight, including a speedy orientation to the gay world — “the CliffsNotes version,” said Choi.

But coming out was not just a matter of personal liberation. It was a declaration of responsibility to future generations who deserve the truth about the sexual diversity of the world, said Choi, including its caste of warriors.

And the U.S. caste of warriors is itself diverse. “I think there are more gay people in the military than straight people,” said Choi, founder of Knights Out, a group of gay West Pointers. “Some people are running away from their issues of masculinity.”

He pointed to himself as an example. “In a lot of ways, I was a self-hater,” said Choi of his young manhood. “I hated myself and I hated gay people.”

Take a highly vocal, aggressive homophobic, he added, and “chances are they are actually gay.”

Choi read from a copy of the discharge letter he received this spring, which cited his “moral and professional dereliction” for openly declaring his sexual orientation. He acknowledged parallels between his protest (against hypocrisy) and protests decades ago during the Vietnam era (against war).

“I put on the uniform, I went to war,” said Choi of personal honor and truthfulness, “and I fight for the same things.”

To make his point, Choi burned the discharge letter at the podium. It was a dramatic moment, but one that showed the young first lieutenant was also in need of the CliffsNotes version of protest: To burn a letter, you hold the flame down, not up.

The moment also displayed an Army officer’s instinct for planning and precaution: Choi dropped the glowing, charred missive into a bowl of water by his side.

Protest alone won’t repeal “don’t ask, don’t tell,” he said. For starters, “demand the president make [repealing it] an executive order,” said Choi, who answered his discharge letter with an open letter to Barack Obama. “We need to hold his feet to the fire.”

Critics of repealing DADT argue that gays openly serving in the military would disrupt discipline, morale, unit cohesion, and readiness. But the present U.S. military is already significantly gay, said Choi — and most of the rest are open to having a comrade-in-arms who is homosexual.

Choi received his discharge letter months ago, but his actual fate has not been decided yet. Among the possibilities is the military’s “other than honorable” discharge, which would deny him veterans’ benefits for education and health care.

Meanwhile, he speaks, he marches, he writes, and he waits.

“The Army,” said Choi, “is in the closet about what they want to do with me.”