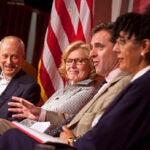 By Stephanie Schorow Special to the Harvard News Office

As the hurricane bears down on the village, the people do what many all over the world do: head to the local school for shelter. A place of learning in normal times becomes a place of refuge during disasters.

That is, if the school remains standing.

Illac Diaz saw a development opportunity in this dual purpose. A Reynolds Foundation Fellow at the Harvard Kennedy School, the Philippines native launched an international contest to see whether planners could design a model school for developing countries that is disaster resistant, cost-effective, energy efficient, and adaptable to other sites. The winning design will be used to build a school in a devastated area of the Philippines and could be a prototype for other countries.

“My professor once said if there is something that bothers you, it probably bothers other people,” said Diaz, a midcareer M.P.A. student, whose company, Pier One, provides assistance to Filipino maritime workers. While working on disaster relief, Diaz saw structures that took years and thousands of aid dollars to build being destroyed in hours.

“Basically with stronger typhoons, the old way of doing things was no longer valid,” he said. “Maybe there’s another way. Maybe because this is such a problem globally, we can call people to attention and we can come up with a solution.”

The result was the Millennium School Design Competition Contest. On May 2, the winners were announced in a special forum on designing for a “Climate-Challenged World,” co-sponsored by the Center for Public Leadership at the Kennedy School and the Special Program for Urban and Regional Studies at the Massachusetts Institute of Technology.

“If we are going to talk about climate change, we must also look at the people who have suffered because of these changes,” said Diaz.

The Philippines are hit hard by typhoons due to global warming, Diaz said. Typhoons typically number about 16 a year, five of them destructive. In 2006 Typhoon Reming destroyed 1,200 classrooms in the province of Camarines Sur.

“When everything goes to hell, our houses are not strong enough to withstand cyclones,” residents told Diaz during research for the Kennedy School. “The places that we run to are the schools. If the schools are not built well, we have to go to the next town. And that is where the casualties start.”

The Philippine government, however, spends an increasing percentage of its budgets on disaster assistance, rather than infrastructure improvement. Indeed, Diaz said, there is little incentive among contractors to build better buildings, because they get more money rebuilding structures downed by storms.

Under a “Build Better, Be Better” campaign, Diaz won jurisdiction for land in Camarines Sur to build a new kind of school. He thought, “Why don’t we ask the world to participate?” and then organized the international design contest.

The response — 300 entries, many with innovative, groundbreaking designs — overwhelmed Diaz. The winner was architect Eleena Jamil of Malaysia, who submitted a design that uses strong, yet flexible, bamboo to create a structure that can withstand winds of 150 mph.

Those who entered the contest also gained valuable experience. “It was nice to see a competition with such a clear, positive social agenda,” said Benjamin P. Bakas, leader of a team from the Jacobs North American Infrastructure Group, which won an honorable mention and $2,000 for a design that utilized folding panels and counterweights to open and close the structure’s outer shell.

Speakers at the May 2 forum underscored the need for innovative response to climate change.

Adil Najam, director of the Pardee Center for the Study of the Longer-Range Future at Boston University, called climate change “the defining human problem,” but said that the world must move from “mitigation to adaptation” and “that turns into a development problem.”

Architect Bill Reed, of the Integrative Design Collaborative, stressed that “development” was not synonymous with environmental destruction. From a seaside Mexican housing complex that re-creates a mangrove forest to simulating long-lost beaver dams to bring water to desert plots in Arizona, development can actually “heal” land ruined by past development, Reed said.

“Sustainability is not a technical solution, it is a living system solution,” he said.

Diaz hopes to post the top designs in the school contest online so that the knowledge can be used for other development solutions.