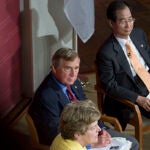 Firm allies, past and present

The U.S. Constitution, the cornerstone of the American federal system of government, will be under close scrutiny at Harvard on Thursday (Sept. 17) as a collection of scholars examines both its merits and shortcomings.

A panel of constitutional experts will explore the impact and significance of the landmark document in a discussion titled “The U.S. Constitution: What Should We Celebrate and What Should We Criticize?” The program will be followed by a conversation between retired U.S. Supreme Court Associate Justice David Souter and Harvard Law School’s Noah Feldman, Bemis Professor of Law.

The discussions will be part of a celebration commemorating Constitution Day, a yearly event to honor the signing of the U.S. Constitution.

Organizers hope to provoke a spirited debate and invite commentary on the revered text — which outlines citizens’ rights, the law of the nation, and the role of the government’s three branches (judicial, executive, and legislative).

“I was fortunate to get participation from five renowned legal scholars who have strong views on the contributions and limitations of constitutional law for American democracy,” said Nancy Rosenblum, chair of Harvard’s Department of Government, who helped coordinate the program in collaboration with the University’s Office of the Provost.

Rosenblum, the Senator Joseph Clark Professor of Ethics in Politics and Government, also included panelists familiar with comparative constitutional law “so they can [discuss] how our Constitution is different from other constitutions and make some judgments about that.”

“We should celebrate the Constitution as a symbol of our nation’s aspirations to promoting justice and the general welfare, to quote the preamble, and we should criticize some of the structures embedded in the Constitution that make it difficult for us to do so,” said panelist Mark Tushnet in a preview of the discussion.

While panelist Charles Fried, Beneficial Professor of Law at HLS, acknowledged that the Constitution should be honored for its style, endurance, and flexibility, he said that some of its structural faults hamper its effectiveness.

“Obviously there are severe defects,” said Fried, former solicitor general of the United States, “and there’s a question whether we can, within its terms, deal with them.”

Other members of the panel include Michael Klarman, Kirkland & Ellis Professor of Law at HLS; Alex Keyssar, Matthew W. Stirling Jr. Professor of History and Social Policy at Harvard’s John F. Kennedy School of Government; and Sanford Levinson, professor of government at the University of Texas Law School whose most recent book, “Our Undemocratic Constitution: Where the Constitution Goes Wrong (And How We the People Can Correct It),” was published in 2006.

The discussion, moderated by Rosenblum, will begin at 1 p.m. in room 105 of Emerson Hall, and will be immediately followed by the conversation with Souter and Feldman.

The Harvard event is in keeping with a 2004 law that mandates all educational institutions receiving federal funding hold an educational program relating to the U.S. Constitution.