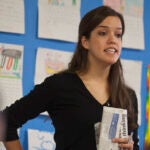 Panel of scholars puts its legacy and effectiveness to the test

The resilience of the U.S. Constitution, the nation’s founding document, was put to the test Sept. 17 by a number of scholars who challenged its legacy and effectiveness.

In honor of Constitution Day, the annual celebration that commemorates the signing of the historic document on Sept. 17, 1787, a group of Harvard constitutional experts met in Emerson Hall to explore why the landmark text should be celebrated and criticized.

Though the criticisms were in greater supply, there were a handful of compliments for the text from the five-member panel.

Charles Fried, Beneficial Professor of Law, said the document’s brief length is one of its most impressive features.

Its small size was to be admired said Fried, who noted that educated and literate statesmen “schooled in the sense of style” were responsible for its crisp language.

“It’s [this] very concision that is its great rhetorical sense,” said Fried.

A testament to its concise nature was the hundreds of miniature copies of the historic document that were handed out to attendees of the forum. With less than 5,000 words used to define the country’s system of laws, division of power into three separate branches, and citizen’s rights, it is one of the world’s shortest constitutions.

But the HLS professor also noted that structural issues, like the separation of powers and the bicameral nature of the legislature, make it “very difficult for the government that [the Constitution] established to actually do anything.”

Many lauded the goals spelled out in the work’s preamble. The concepts of justice, liberty, and domestic tranquility are “political ideals that are worthy of continued adherence,” said Mark Tushnet, William Nelson Cromwell Professor of Law.

But the fact that the document condoned slavery and created a nation of slave owners was a critical flaw, agreed the panelists.

“Framers had to do so if they wanted the participation and agreement of the Southern states,” acknowledged Michael Klarman, Kirkland & Ellis Professor of Law. “Still it’s hard to celebrate a document that protected slavery for 20 years.”

Another failing, many noted, is the Constitution’s creation of the electoral college — the system that allows popularly elected electors from each state to in turn officially vote for the president of the United States.

“[It] does not provide for a popular election for president,” said Keyssar. “That has created problems and still continues to do so. … Both Richard Nixon and Bill Clinton got the keys to the Oval Office by getting 43 percent of the [popular] vote. This is nowhere near majority approval.”

Tushnet called the Constitution’s Article V, which is an amendment clause, its most “anti-democratic feature,” noting that the article makes it “functionally impossible to amend the Constitution with regard to anything of significance.”

Hundreds gathered for the panel and the ensuing conversation between Feldman and Souter.

On his 70th birthday, and the celebration of the Constitution’s signing, the graduate from both Harvard College and HLS and a native of Weare, N.H., offered his perspective on the Constitution and reflected on his own career. While President George H.W. Bush — a Republican — appointed Souter in 1990, the associate justice developed a reputation as part of the court’s liberal wing throughout his tenure.

The nature of the Constitution intentionally involves both waste and inefficiency, he said.

“The very point of the structural element of the Constitution is to make some things difficult. They were made difficult in part to eliminate too much efficiency of power at the highest level …  and not to let ourselves go too far, too fast.”

Feldman, who clerked for Souter in 1998, asked the retired associate justice to weigh in on the common refrain that a justice’s job is to simply interpret, not make the law.

Interpreting and understanding a certain text as it relates to the application of the law often requires a reliance on outside references, said Souter. “When judges have to look to references outside to answer questions about application … which are not spelled out … then [that] is a perfectly legitimate sense in which judges are making laws.”

In his retirement, Souter said, he would be working part time for the U.S. Court of Appeals for the 1st Circuit Court in Boston. In addition, Souter said he is lending his support to a New Hampshire citizen’s committee that is exploring a curriculum for civic education in the state’s public schools. Since being a Supreme Court justice left little time for extracurricular reading, he plans with his extra time to enjoy his “very good, unread library.”

Nancy Rosenblum, chair of Harvard’s Department of Government and the Senator Joseph S. Clark Professor of Ethics in Politics and Government, helped coordinate the program in collaboration with the University’s Office of the Provost. She also moderated the event.

The Harvard event is in keeping with a 2004 law that mandates all educational institutions receiving federal funding hold an educational program relating to the U.S. Constitution.

Sanford Levinson, professor of government at the University of Texas Law School, also took part in the panel.

The Webcast of the event will be archived for future viewing.