Working to lift the fog of war 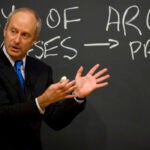 Thousands of miles from his Harvard lab, Kevin Kit Parker is lugging a gun and his engineer’s sensibilities through the mountains south of Kabul, in Afghanistan’s Wardak and Logar Provinces.

Six years after his first tour as a U.S. Army captain in Afghanistan, Parker, Cabot Associate Professor of Applied Science, is back. He’s a major now, working with the 10th Mountain Division to improve how the Army carries out its evolving mission there.

Though the task includes analysis and report-writing, it’s far from a desk job. Parker goes on missions of a few days to a few weeks, observing and participating in the work of the 10th Mountain Division’s 3rd Brigade.

Parker’s work for the Center for Army Lessons Learned seeks to engineer a more efficient American operation in Afghanistan by incorporating lessons from the field into the planning of future missions. Though Parker’s job is to understand everything from planning to execution, he says it is often most effective to look at a mission’s effects and work backwards, seeking ways to change the outcome.

“I am either outside the wire on a mission or I am inside the wire trying to get all the information so that another unit can replicate [that mission’s] successes or avoid its pitfalls,” Parker wrote in a mid-June e-mail.

By any account, Parker is an unusual soldier. In between deployments and training, he’s a Harvard professor and bioengineer, leading the Disease Biophysics Group at the Harvard School of Engineering and Applied Sciences (SEAS). He’s also a member of the Wyss Institute for Biologically Inspired Engineering, dedicated to understanding nature’s own engineering methods and using them in medical and non-medical applications.

Parker’s Disease Biophysics Group studies the mechanical-electrical and mechanical-chemical pathways that influence the functioning of cardiac cells and tissue. In 2007, he and colleagues created what are essentially tissue robots by marrying human heart tissue with a rubber substrate. The resulting “muscular thin films” engaged in semi-autonomous gripping, pumping, walking, and swimming.

In his absence, the work of Parker’s lab has moved ahead under the guidance of postdoctoral fellow Adam Feinberg, who’s worked in the lab since 2005.

“This is a team effort. You can look to Kit’s military training [to see how] he put together a well functioning team to fill in and run the show in his absence. Everyone in our lab group — all six postdocs and seven graduate students — have really stepped up and done a great job,” Feinberg said.

Parker keeps in touch via e-mail and through monthly written updates from lab members. Despite the benefits of technology, though, Parker admits he can’t provide the same level of guidance that he would if he were on campus. Feinberg said he and the other postdocs fill in the gaps.

“All the projects have made great progress while Kit has been gone,” Feinberg said. “Our GlaxoSmithKline collaboration has produced a couple of breakthroughs and our traumatic brain injury project has finished developing some incredible new tools to study blast injury in the dish. … This has happened because Kit and the students/postdocs together developed well-thought-out plans with clear objectives.”

Parker’s first deployment to Afghanistan, in late 2002 and 2003, was a more traditional one. As a captain, he led a five-person team that patrolled 900 square miles of Afghanistan south of Kandahar near the Pakistan border. Before leaving on that deployment, Parker had to put off his initial appointment at Harvard, which was supposed to take effect in September 2002.

He finally made it to campus the following year, returning from Afghanistan the day before taking up his post in Cambridge. In the years since, he’s lived twin lives as a member of the Faculty of Arts and Sciences and of the Rhode Island Army National Guard. In addition to the regular National Guard training, Parker took part in several additional Army training courses and trained with British paratroopers in Great Britain prior to dropping into the Netherlands to mark the 60th anniversary of Operation Market Garden, the World War II parachute drop that remains the largest airborne assault in history.

In the years since he left Afghanistan, Parker has married. He and his wife, Kimberly, had a daughter, Caroline, last summer. She was just four months old when he departed for Afghanistan in December. Parker said leaving them was the hardest thing he’s ever done.

“I’d rather be shot at for hours than relive that,” Parker wrote.

Parker is deployed to a different part of Afghanistan from his initial stay, trading the heat of the desert for mountain snows. That makes it difficult to compare what progress has been made in the six years since. One thing that’s certain, he said, is that the needs remain great. Afghanistan needs engineers, teachers, managers, and other skilled professionals. The country’s future, he said, will depend on developing visionary, capable leadership to carry out the will of the people.

Though his job is more analytical than it was last time around, Parker gets into the countryside regularly. When he’s outside the wire, he spends most of his time looking for IED’s — improvised explosive devises.

“We’ve found quite a few, some the hard way,” Parker wrote.

The other main aspect of his mission is to observe how the Afghan government is operating and its effects on the economy and infrastructure.

Parker is reluctant to talk much about fighting he’s seen, though he said there’s been more of it than on his first tour, including the worst gun battle he’s experienced.

“Gunfights are not the big battle here,” Parker says. “The primary conflict here is a test of wills. … We’re in a phase transition. Phase transitions can be gnarly.”

Though the overall mission is important, Parker said the best part of his work is the fellowship with other soldiers, working together and trusting each other — even with their lives on the line — to accomplish a specific task.

Parker says he’ll be back on campus in July, when he’ll settle back into the life of a new father and a Harvard professor. His wife and daughter are eagerly awaiting that day. Kimberly said she’s grateful that the School has reached out to her in Kit’s absence, inviting her to events such as faculty retirement celebrations. She said she’s visited the lab and Kit’s office, staying involved as much as a mother of a now-10-month-old can. Taking advantage of the same technology that allows Parker to stay in touch with the lab, Kimberly e-mails pictures and video of Caroline, and reminds Caroline to kiss her father’s picture each night.

“Every night before we go to sleep we pray for him,” she said. “By his friends and his family, he is missed.”