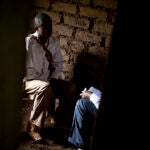 While growing up in the Rift Valley Province in western Kenya, Kipyegon A. “Kip” Kitur milked goats and fed cattle before running to school. It was two miles away, uphill, past steep maize farms.

After school and on weekends, Kitur — 22 now, and athletically lean — would cut napier grass for animal feed, mend fence, clear fields, or strap into a plow harness behind an ox to cut furrows for planting maize.

Some Harvard College graduates come far, and others come from far away. Kitur has done both. The Adams House senior picks up a degree in chemistry today (June 4), and a week from now moves to suburban New York City to start a career in finance with the Royal Bank of Canada.

In every sense, Greenwich, Conn., is a long way from Kamureito, Kitur’s hometown in Kenya’s Bomet district.

His family lives in a steel-roofed stucco house shaded by fruit trees. Behind the house is a circular mud hut with a high conical roof of thatched grass. It was once the family house and is now the kitchen.

Beyond are the five acres of land where the family raises goats, cattle, corn, and kitchen crops. The family fields, said Kitur, are about the size of Harvard Yard.

He was the 14th of 14 children, and the first to be born in a hospital. To date, in a testament to the foresight of his unschooled parents, eight of Kitur’s siblings have associate degrees.

Since arriving at Harvard in September 2005, Kitur has been back home only once, for 20 days.

Today, his parents — Kibochabas “Solomon” Baibai and Grace Baibai — will be watching the ceremonies at Tercentenary Theatre. Neither parent had been out of Kenya before, or on an airplane. Neither reads or writes any English. Solomon Baibai, who worked once for the colonial British government, can read some Swahili.

Swahili was the language of Kitur’s schooling in Kenya, though he grew up speaking his native Kalenjiin. (The Kalenjiin tribe are famous worldwide for their distance runners, and Kitur himself ran two years of varsity track and cross-country for Harvard.)

Up to seventh grade Kitur attended local public schools. In first grade, he remembers a visit by Dutch nuns, medical missionaries who traveled rural Kenya giving vaccinations and teaching the rudiments of public health. In their white robes and wimples, they seemed like visitors from outer space, but “they impressed and inspired me,” said Kitur.

By eighth grade, he moved to a boarding school in order to increase his chances of doing well on the national exam that in 12th grade determines everyone’s academic future.

Kabungut High School is not the best in Kenya. “It did not have enough books and many of them were out of date,” said Kitur, who chaired the science club there. “But I worked hard and stayed close to my teachers.”

His father, who makes a dollar a day, sold milk and maize to help pay tuition, which is 22,000 Kenyan shillings a year — about $300. (The best schools cost about five times as much.) Kitur won a scholarship that paid two-thirds of the cost.

Among 3,750 students in the Bomet district, Kitur graduated with the highest score on the fabled and feared national exam, the Kenya Certificate of Secondary Education test. The feat, unusual for a boy from a second-rung boarding school, landed Kitur in the news.

The story was noticed by Stanford University alumnus Michael Boit and former Time Inc. journalist John Manners ’67/’68, co-founders of KenSap, the Kenya Scholar-Athlete Project. Kitur was among a dozen young Kenyans that year selected to get three weeks of intensive training for the SATs.

Kitur knew nothing of Harvard, and had not even imagined going to the United States for college. It was still an option, he said, to simply return to the farm or to start his own small business in the village.

But Harvard it was. On campus, Kitur worked 20 hours a week to augment his aid, managed a translation center for Harvard Student Agencies, sold ads for “Let’s Go,” tutored, volunteered for poverty groups, rebuilt houses after Hurricane Katrina, and worked in laboratories exploring new antibiotics and cancer cures.

This spring, Kitur is grateful not just for his luck, and his capacity for hard work, but for inspiration from his father — a man with no formal schooling, but whose exposure to the British awakened a sense that learning was powerful.

In the long term, Kitur dreams of a Ph.D./M.B.A. program that would get him back home with the skills to build Kenya’s pharmaceutical capacity.