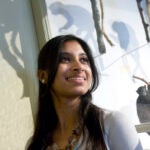 By Michael Patrick Rutter School of Engineering and Applied Sciences

Computer scientists at Harvard have developed a framework for studying the arrangement of tissue networks created by cell division across a diverse set of organisms, including fruit flies, tadpoles, and plants.

The finding, published in the June 2009 issue of PLoS Computational Biology, could lead to insights about how multicellular systems achieve (or fail to achieve) robustness from the seemingly random behavior of groups of cells, and provide a road map for researchers seeking to artificially emulate complex biological behavior.

“We developed a model that allows us to study the topologies of tissues, or how cells connect to each other, and understand how that connectivity network is created through generations of cell division,” says senior author Radhika Nagpal, assistant professor of computer science at the Harvard School of Engineering and Applied Sciences (SEAS) and a core faculty member of the Wyss Institute for Biologically Inspired Engineering. “Given a cell division strategy, even if cells divide at random, very predictable ‘signature’ features emerge at the tissue level.”

Using their computational model, Nagpal and her collaborators demonstrated that the regularity of the tissue, such as the percentage of hexagons and the overall cell shape distribution, can act as an indicator for inferring properties about the cell division mechanism itself. In the epithelial tissues of growing organisms, from fruit flies to humans, the ability to cope with often-unpredictable variations (referred to as robustness) is critical for normal development. Rapid growth, entailing large amounts of cell division, must be balanced with the proper regulation of overall tissue and organ architecture.

“Even with modern imaging methods, we can rarely directly ‘ask’ the cell how it decided upon which way to divide. The computational tool allows us to generate and eliminate hypotheses about cell division. Looking at the final assembled tissue gives us a clue about what assembly process was used,” explains Nagpal.

The model also sheds light on a prior discovery made by the team: that many proliferating epithelia, from those of plants to frogs, show a nearly identical cell shape distribution. While the reasons are not clear, the authors suggest that the high regularity observed in nature requires a strong correlation between how neighboring cells divide. While plants and fruit flies, for example, seem to have conserved cell shape distributions, the two organisms have, based on the computational and experimental evidence, evolved distinct ways of achieving such a pattern.

In the future, the team plans to use its approach to detect and study various mutations that adversely affect the cell division process in epithelial tissues. Epithelial tissues are common throughout animals and form important structures in humans from skin to the inner lining of organs. Deviations from normal division can result in abnormal growth during early development and to the formation of cancers in adults.

“One day we may even be able to use our model to help researchers understand other kinds of natural cellular networks, from tissues to geological crack formations, and, by taking inspiration from biology, design more robust computer networks,” adds Nagpal.

Nagpal’s collaborators included Ankit B. Patel and William T. Gibson, both at Harvard, and Matthew C. Gibson at Stowers Institute.