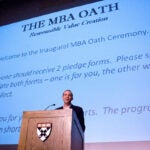 Harvard Professor Michael Sandel, chosen by the BBC to deliver its Reith Lectures for 2009, can be heard on the BBC Web site. The Reith Lectures, considered the most prestigious public lectures in Britain, were delivered in May and early June in London, Oxford, Newcastle, and Washington, D.C, and were recorded before live audiences, and are being broadcast over the Web. The first lecture, titled “Markets and Morals,” is currently (June 15) online, and two more lectures will be available soon, one on June 16 and one on June 20.

Sandel is the first Harvard faculty member to receive the honor since John Kenneth Galbraith in 1966. His lectures, titled “A New Citizenship,” addressed the prospect for a new politics of the common good.

“The Reith Lectures are the premier national series of lectures sponsored by the BBC and are intended to look deeply at some of the ideas and theories addressing the major issues confronting the world,” says Shirley Williams, a leading British political figure and public service professor of electoral politics at the Harvard Kennedy School, emeritus. “Michael Sandel was chosen because of his outstanding, profound, and serious contribution to political and constitutional deliberation.”

Sandel’s lecture topics are “Markets and Morals” (London), “Morality in Politics” (Oxford), “Genetics and Morals” (Newcastle), and “A New Politics of the Common Good” (Washington, D.C.). While in London, Sandel participated in a discussion of his work with government advisers and ministers at 10 Downing Street, the prime minister’s residence.

Sandel’s scholarly work has addressed issues such as democracy, ethics, public philosophy, the role of markets, and the erosion of community and moral values. Sandel is the Anne T. and Robert M. Bass Professor of Government in Harvard’s Faculty of Arts and Sciences, and has taught political philosophy since 1980. More than 14,000 students have enrolled in his undergraduate course, “Justice.”

“The invitation to Professor Michael Sandel to deliver them came as no surprise to those who know his work,” says Bhikhu Parekh, professor of political philosophy at the University of Westminster. “Over the years he has made a considerable contribution to our understanding of the nature of the human self, political life, justice, and citizenship, and is rightly regarded as one of the most original political philosophers of our age. His unique voice cuts across the prevailing ideological and philosophical divides and offers important insights into the troubling issues of our age.”

Sandel gave the Tanner Lectures on Human Values at Oxford University in 1998, has been a visiting professor at the Sorbonne in Paris, and recently delivered a series of seven lectures on political philosophy at major universities in China.

In his most recent book, “The Case Against Perfection,” Sandel argues against the use of genetic engineering to create designer children, and suggests that the genetic revolution will force spiritual questions back onto the political agenda. His new book, “Justice: What’s the Right Thing to Do?” will be published in September.

The Reith Lectures are named for John Reith, the BBC’s first director-general, who maintained that broadcasting should be a public service that enriches the intellectual and cultural life of the nation. It is in this spirit that the BBC each year invites a leading figure to deliver a series of lectures on radio. The aim is to advance public understanding and debate about significant issues of contemporary interest. The Reith Lectures began in 1948.