Seceding from the secessionists 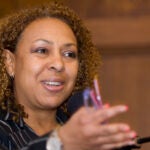 Deep in Civil War Mississippi, where manicured plantations gave way to wild swampland and thick pine forests, a young white man named Newton Knight led a ragtag band of guerilla fighters against the Confederate Army. His story is one of personal bravery and unwillingness to adhere to the secessionist movement that all but surrounded him. It also tells of interracial alliances and the complexity of politics during the Civil War, when allegiances were not quite as simple as “Northern” or “Southern.”

Knight’s rebellion is the focus of “The State of Jones,” a forthcoming book by John Stauffer, chair of the Program in the History of the American Civilization and professor of English and of African and African American studies, and Sally Jenkins, journalist and columnist at the Washington Post. The book’s title refers to Jones County, the area of Mississippi where Knight lived and fought. Jones was the poorest county in the state and a surprising bastion of Unionism.

The story of Jones first emerged in 1886 in Magazine of American History. Until recently, Stauffer noted, Knight has been cast as a common thief or a madman. Writer, director, and producer Gary Ross learned about the story, decided to write a screenplay, and hired Stauffer as a consultant. He then encouraged Stauffer and Jenkins to write a book. The pair spent time at numerous archives throughout the United States; what they discovered was a fascinating history that shed new light on Unionism in the South.

“To this day, there is a popular misconception that white Southerners were united in their embrace of the Confederacy,” said Stauffer. “Stories like Newton Knight’s demonstrate that it was not the case.”

The residents of Jones County were primarily poor yeoman farmers and Primitive Baptists who opposed slavery and secession for economic and, in some cases, religious reasons.

“They lived hardscrabble, rough lives,” said Stauffer, “in stark contrast to the cotton-fueled wealth that could be found throughout the Mississippi Delta.”

Newton Knight — whom Stauffer calls “Newt,” as though he’s speaking of a friend he saw yesterday — was a radical reformer and leader in his community. He opposed slavery for religious and economic reasons. After being pressed into service for the Confederate Army and serving at the Battle of Corinth, Knight and his friends deserted and retreated to hide out in Jones County.

“His life was saved by blacks, who taught him how to survive in the woods and swamps,” said Stauffer.

Knight began rounding up like-minded deserters and black allies and trained them to fight and survive on the forbidding terrain. In 1863, following the Battle of Vicksburg, the men pledged allegiance to the United States and launched a campaign of guerilla warfare against Confederate troops.

“The company consisted of about 70 men, and they received aid from [Gen. William Tecumseh] Sherman,” Stauffer said. “The Confederates kept trying to snuff them out with cavalry, but Newt and his men knew how to fight in the swamps.”

By the end of the war, numerous Unionist guerrilla companies controlled the Piney Woods, the bottom quarter of the state. The strength of Unionism in Southern Mississippi was “terrifying” to the Confederate leadership, Stauffer said.

“Mississippi was the marrow of the Confederacy, the second state to secede, and home to some of the wealthiest and most powerful men in America,” said Stauffer. “The Confederate high command was frightened and outraged by the amount of Unionism that emerged there.”

Even more alarming for Confederates, Stauffer said, was the idea of whites and blacks rebelling in league.

“This truly was their worst nightmare,” he said.

The end of the Civil War brought little comfort for Knight and his men, according to Stauffer.

“The Confederates surrendered but they did not lay down their arms,” Stauffer said. “Instead, they continued shooting blacks, Unionists, and Republicans, and started a reign of terror throughout the South.”

During Reconstruction, Knight befriended and worked with Republican Gov. Adelbert Ames and led a company of black militiamen.

“They were essentially living under siege, fighting off the former Confederate soldiers, who continued to kill Republicans at will,” said Stauffer.

The continuation of violence highlights the extent to which the South won the war, “not only ideologically but militarily,” Stauffer argued.

“The long, scholarly legacy of romanticizing the South has overshadowed these stories of Southern Unionism,” Stauffer said. “The desire for reunion between Northerners and Southerners required the war to be whitewashed. During Reconstruction, the last phase of the war from Knight’s perspective, white Southerners won a war of attrition, preserving the old order of black unfreedom — despite constitutional amendments that guaranteed equality under the law for all persons.”

Official records, such as Confederate reports, proved helpful for Stauffer and Jenkins as they researched the history of Jones County.

“We only have one letter by Newt … so we had to rely extensively on official documents along with ‘parallel narratives’ from people whose experiences resembled those of Newton, such as ex-slaves and other Republicans in the South,” Stauffer said.

Stauffer and Jenkins also traveled to homes in Mississippi to meet and conduct interviews with descendants of the Knight family.

“The State of Jones” is published by Doubleday Press. It will be available in June.