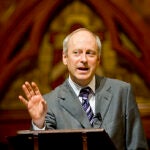 As President Obama and his new administration seek to redirect U.S. foreign policy back toward more emphasis on diplomacy and less on the use of force, they should not overlook Orthodox Christianity as a resource.

That was the message, implicit and explicit, that Elizabeth Prodromou, assistant professor of international relations at Boston University, carried to the Belfer Center Library Monday (May 11). “It’s impossible to ignore the Orthodox churches,” with their 350 million adherents, she said. They are relevant in three parts of the world where the Obama administration seeks to hit the “reset” button — Russia, the Middle East, and Europe.

The relationships Orthodox churches have with their national governments are unquestionably different from those of churches in the West. They are at least “tight,” and arguably complicitous. But these churches are not monolithic, she said. “Underneath the umbrellas of these official churches there are myriad cleavages and subgroups.” Some of these hold views more helpful to U.S. interests than others, and smart policy, she suggested, would be to engage with those more helpful elements. A first step would be “acknowledging that the official church is not a unified actor.”

Prodromou began her talk, “Religion and U.S. Foreign Policy: Understanding and Engagement with Orthodox Christianity in Russia, the Middle East, and Europe,” by noting that it is a commonplace to observe that social scientists and policymakers have “rediscovered” religion since the end of the Cold War.

“But there’s a curious ahistorical side of this,” she said. Policymakers tend to see religion broadly as a threat to U.S. interests. But they also tend to forget the role that religion, specifically Christianity, has had historically in nation building in the United States. “Religious ideas informed the particularities of national identity,” Prodromou said. This is seen in the story of the Pilgrims’ landing at Plymouth and in the conception of the rights articulated in the Declaration of Independence as divinely granted. More recently, it was also seen in the explicit framing of the Cold War as a conflict with “Godless communism.”

And indeed, Orthodox Christianity figured into high-level American thinking during the Cold War, according to Prodromou. Recently declassified archives show, she said, that President Dwight Eisenhower and his secretary of state, John Foster Dulles, understood the importance of Orthodox Christianity in Russia, Ukraine, and also the “post-Ottoman space” of Southeastern Europe and the Middle East.

Those parts of the world are relevant again — or still — as the Obama administration seeks to create “change you can believe in.” In foreign policy terms, Prodromou said, this means “the revaluation of diplomacy over force, multilateralism and partnership over unilateralism and exceptionalism.” It also means “a reconceptualization of global cultural heterogeneity in terms of religious pluralism and constructive engagement, rather than religious cleavage and civilizational conflict.”

All this matters for Orthodox Christianity, Prodromou continued, because Obama has mapped this vision onto certain specific geographical areas where Orthodoxy is important. Failure to understand this means that the United States has not yet “leveraged the assets” of this historic faith.

She warned against two tendencies in American views — two “ideologies of otherness” that lead to the omission or misunderstanding of Orthodox Christianity from foreign policy thinking. One is a “neo-bipolar,” or neo-Cold-War, view. This is a tendency to see the Orthodox Church as too closely aligned with a Russia that seems to be hardening back into its old authoritarian ways. The other tendency is a sort of “neo-Orientalist” view of Orthodoxy. This would cast it as a “mongrelized religion,” somehow muddled by proximity to Islam.

In addition to her role at Boston University, Prodromou is also a member of the United States Commission on International Religious Freedom. The commission was established by Congress after it passed the International Religious Freedom Act (IRFA) of 1998, which makes support for freedom of religion around the world an explicit goal of U.S. foreign policy. The commission monitors the state of religious liberty around the world and attempts to identify governments that are falling short.

Taking care to speak as an academic rather than a commissioner, Prodromou expressed some reservations about IRFA. One of its “unanticipated negative consequences,” she said, is that “religion has been instrumentalized.” People around the world understand that conservative Jewish and Christian activists around the world had a big role in getting the law passed in the first place. The act has been “read negatively,” as something used to support or justify proselytizing and to further U.S. foreign policy interests.

Religious liberty is an element of all the “human rights architectures” to which the United States is committed. But IRFA “may have set the bar too high,” she said, by in effect putting U.S. support for international religious liberty on the same level of foreign policy objectives as strategic national interest.

The law mandates sanctions against countries found wanting in their support of religious liberty, some of them allies or friends of the United States — Saudi Arabia, for instance. By waiving sanctions, as the law does allow, “The United States opens itself up to inconsistency at best and hypocrisy at worst,” Prodromou said.

Prodromou’s talk was hosted the Kokkalis Program on Southeastern and East-Central Europe. It was also co-sponsored by the Weatherhead Center for International Affairs Religion and Politics Seminar Series.