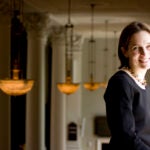 ‘Paging God: Religion in the Halls of Medicine’

The Nieman Foundation for Journalism at Harvard will present the Louis M. Lyons Award for Conscience and Integrity in Journalism to current Nieman Fellow Fatima Tlisova Thursday (May 7).

As an investigative journalist, researcher, and expert on human rights issues in the North Caucasus region of Russia, Tlisova is being honored for courageous reporting in the face of severe intimidation and physical assaults. She has written extensively on abuses suffered during military operations in the area; torture and disappearances; corruption; Circassian nationalism; women’s rights; censorship; and the role of Islam in regional affairs. She also has led several training workshops for journalists in the North Caucuses and served as editor-in-chief of the North Caucasian bureau of the REGNUM News Agency for three years.

Tlisova has worked as a correspondent for a number of Russian newspapers such as Novaya Gazeta as well as international media, including the Associated Press, Radio Free Europe/Radio Liberty, and the BBC. She was awarded the German Zeit-Stiftung Gerd Bucerius Award in 2006 for her commitment to reporting on the conflict in Chechnya, one year after receiving the Rory Peck Freelancers Choice Award for continuous bravery, commitment to the story, and efforts to help fellow journalists. She has won numerous other awards for her work, including an Amnesty International U.K. Media Award in 2008. During the 2007-08 academic year, she was a fellow at Harvard Kennedy School’s Carr Center for Human Rights.

The Nieman Class of 2009 chose Tlisova — their own classmate — for the award, noting that her work and example have set the highest standard for the journalism profession. In selecting her, they recognized Tlisova as “a brave reporter and sensitive spirit, a woman whose published work bears witness to the hidden truths of a violent place.” Several fellows stated that they believe her best work is yet to come. Although a number of Nieman Fellows have been given the Lyons Award in the past, Tlisova is the first to receive the honor as a current fellow.

Nieman Curator Bob Giles added, “Fatima has faced great dangers on the job, including violent beatings and poisoning, yet she has never faltered in her pursuit of the facts. She has watched as friends and colleagues have been threatened and killed but she remains deeply committed to telling the stories of her homeland and countrymen, understanding how crucial her work is to the cause of justice. She is an inspiration to us all.”

Finalists for this year’s Lyons Award

Jesus Blancornelas, an investigative journalist who exposed political corruption and the power of drugs gangs in Mexico, particularly the Tijuana Cartel. The object of several attempts on his life, Blancornelas died in 2006 from complications caused by stomach cancer.

Donna DeCesare, an award-winning photojournalist who has risked her life to cover human rights and justice issues. She is widely known for her groundbreaking photographic reports on the spread of Los Angeles gangs in Central America. Her photographs and testimonies from children who are former child soldiers, survivors of sexual abuse, or who live with the stigma of HIV helped UNICEF to develop protocols for photographing children at risk.

Jestina Mukoko, a former broadcast journalist with the Zimbabwe Broadcasting Corporation, who is now a human rights activist and the director of the Zimbabwe Peace Project. Accused with nine other activists of planning to overthrow President Robert Mugabe, Mukoko was abducted from her house in December 2008 and tortured for several days before she was arraigned. She was released on bail on March 2 of this year but still faces criminal charges.