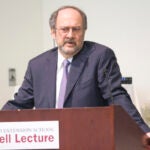 Obama and the art of the possible

The Paul Tillich Lecture, offered annually at Harvard since 1990, commemorates the memory of a public intellectual who was once “the largest theological figure in our orbit,” said The Rev. Peter J. Gomes.

Gomes is Plummer Professor of Christian Morals and Pusey Minister in the Memorial Church, where Tillich often preached while a University Professor at Harvard from 1954 to 1962.

Tillich (1886-1965) was an existentialist Christian who embraced God as “the ground of being.” It was a concept of the divine that offered shelter from the existentialist idea of “non-being,” with its attendant despair over life’s apparent meaninglessness.

Born in Prussia and a World War I German army chaplain, Tillich was in 1933 the first non-Jewish professor dismissed from a university following Hitler’s rise to power. He is regarded as one of the 20th century’s most influential Protestant theologians.

This week (May 4), Gomes introduced the 2009 Tillich lecturer: physician, inventor, and theoretical biologist Stuart A. Kauffman, a visiting professor of science and religion this spring at Harvard Divinity School.

Standing at ease at a Memorial Church lectern, Kauffman offered his thanks, and his surprise. He told the audience of about 200, “I admire your courage in inviting a Jewish fruit fly geneticist who doesn’t believe in God.”

Kauffman, who teaches at the University of Calgary and is an external professor at the Santa Fe Institute, outlined a new conception of the divine that seemed to offer a reformulation of Tillich’s “ground of being.”

In his view of an “emergent” divine, God is the biosphere’s “ceaseless, creative coming,” he said — an expression of life’s “fully natural creativity” in which all living beings share in a kind of co-divinity.

Kauffman’s lecture was an abbreviated look at his latest book, “Reinventing the Sacred: A New View of Science, Reason, and Religion” (Basic Books, 2008).

He offered two basic imperatives: Reinvent science and reinvent God. In Kauffman’s view, science has been captive for centuries to the idea that the universe is only the sum of its physical laws.

Meanwhile, he said, concepts of God have been for even longer captive to the idea that an all-powerful being is the universe’s only creator and agent.

“We stand at the hinge of history,” said Kauffman. On the one hand, science has failed to arrive at one set of laws that describes the physical universe — despite the early descriptive promise of Galileo, Newton, Einstein, and others.

And, on the other hand, globalization has brought the world’s “30 or so civilizations” into a crushing philosophical friction, said Kauffman, challenging our multiple conceptions of the divine, and casting some religions into a defensive fundamentalism.

“All of this,” said Kauffman, “requires new theory.”

Kauffman offers one — the idea that both the natural world (the biosphere) and social world (culture) are themselves “ceaselessly creative” in ways that cannot be foretold, or even fully described.

It’s an idea that tempers our view that science is all-knowing, he said, and that offers a sense of the divine that could be shared across traditions.

Kauffman is a scientist to the core, and his lecture took frequent side trips into higher mathematics, statistics, and evolutionary biology.

But he lamented that since the Age of Enlightenment, science has been increasingly captive to reductionism. That’s the notion that physical laws alone determine the course of the universe, that everything is describable, and that somewhere there exists a single language capable of describing it all.

Most radically, reductionism is the idea that the only reality of the universe is the reality of particles in motion — “a vast computer system,” Kauffman said, capable of reducing every action we take and every emotion we feel and every idea we have to quantum events at the level of atoms and electrons.

He drew a word picture of two lovers strolling by a river. A machine of atoms and electrons at work? “I don’t think so,” said Kauffman.

Instead, we live in “an open universe” so vast and creative and energetic that it denies the possibility of reduction, he said — a place so ceaselessly novel that it is “grossly non-repeating.”

In this “lawless, but non-random” universe, said Kauffman, reason alone becomes “an insufficient guide to living our lives.” That opens the way to intuition, imagination, stories, and metaphor as ways of knowing the world.

In turn, we can embrace “a shareable sense of God” across all traditions, he said. God, our most enduring metaphor, becomes a symbol of the creativity of the universe.

This “sense of membership” in the universe brings with it the gift of agency, said Kauffman — a sense that all humans are actors in the creative divinity of the world.

“Once you have agency in life,” he said, “you have values; you have feelings; you have thoughts; you have moral reasoning.”