Experts talk about reducing crime through a holistic approach 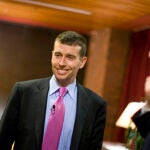 Los Angeles is a city that many equate with violent gangs and an ineffectual and troubled police force. Yet recent years have seen a decline in gang homicides and violent crime due to a new approach in policing.

Three leaders in the fight against gang violence in L.A. told an audience at the John F. Kennedy Jr. Forum on April 16 that while they are reducing gang crime, the battle remains in getting communities and all police officers on board.

Los Angeles Police Chief William Bratton, L.A. County Sheriff Leroy Baca, and Constance Rice, co-director of the Advancement Project, comprised the panel that was moderated by Christopher Stone, Guggenheim Professor of the Practice of Criminal Justice and director of the Hauser Center for Nonprofit Organizations.

The key to the new approach is in its emphasis on the whole environment rather than just suppression of crime.

“We now have the ability in 2009 to go forward with a comprehensive plan that doesn’t rely strictly on suppression or arrest,” Bratton continued. “We know what to do about this problem, that’s the good news. And if we can fix it in L.A., we can, in fact, basically transport it to the rest of America.”

Rice, whose Advancement Project aims to bring peace to urban areas and education to at-risk youths, didn’t deny that the epidemic of violence is ongoing, with estimates of 800 to 1,000 gangs in Los Angeles County and up to 80,000 gang members.

“You can’t have a 20-year youth gang homicide epidemic … without catastrophic levels of gang violence in the hot zones,” she said.

The new holistic emphasis, stressed Rice, can be effective. “This is a public health strategy. … You don’t hand out flyswatters for a malaria epidemic, you drain the swamp; you pass out the insecticide. You train people to change the norms of their behavior. … You get rid of the conditions, the vectors that transmit and amplify the disease.”

Baca said that the culture within the police force as a whole still needs to change and that many areas of public assistance need to unite. He asserted that the city cannot arrest its way out of the gang problem — a sentiment the other panelists shared.

Bratton echoed Baca’s point, noting that the Los Angeles Police Department used to be an “arrest machine,” but that the “hook ’em and book ’em” approach only increased crime in the 1990s. Recently, with cooperation from Baca, Rice, and other public officials, Bratton said that crime is starting to go down and this could become a national model.