Picture this, and you will begin to understand 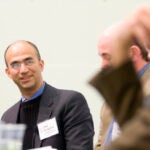 It has been almost 20 years since photographer Felice Frankel started working with scientists by helping them illustrate the intricate geometries of physical worlds too tiny to see.

From the beginning, she was struck by one thing: To explain their ideas, scientists always start by drawing them.

That gave Frankel an idea — “Picturing to Learn,” a project that requires students to draw basic concepts so that a senior in high school might understand them. Why is the sky blue? What do ions do?

“The process itself is a learning experience,” said Frankel. “There is something about getting what your mind is imagining on paper.”

Explanations often involve what she called a “metaphor of activity” — hugging ions, for instance, or molecules excited by rising heat.

“Picturing to Learn,” now in its second phase of funding from the National Science Foundation, has been used in 11 undergraduate courses so far.

Frankel, a one-time landscape photographer and biology researcher, hopes it will become a permanent feature across campus. (She’s a senior research fellow at Harvard’s Initiative in Innovative Computing, where she directs the Envisioning Science program.)

Pen in hand, undergraduates learn more about concepts like ionization or energy transfer by having to explain them to nonexperts, she said. And their teachers can look at the drawings and get a sense of how well students understand what they’re trying to explain.

There’s a database of more than 3,000 images so far, said “Picturing to Learn” project manager Rebecca Rosenberg — most of them from 17 individual homework assignments at five universities.

“You don’t have to be talented,” said Frankel, who admits she can’t draw “for beans.” “We have some wonderful drawings with stick figures that are brilliantly explanatory.”

Some of the explanatory images came from three workshops — at the Massachusetts Institute of Technology, at the School of Visual Arts in Manhattan, and (most recently) at Harvard. (Project partners also include Duke University and Roxbury Community College.)

The idea: Give scientists and designers the same concept to illustrate. Mix them in groups, document the process, and discuss the results.

“We see the value of various disciplines coming together,” said Frankel, whose Harvard workshop was on March 14.

Three groups of four — half designers, half budding scientists — retired to classrooms to grapple with the day’s challenge: A mixture of hydrogen gas and oxygen gas will stay stable indefinitely. But introduce a spark, and the same mixture will explode. Draw an explanation.

Both metaphor and scientific language are allowed, explained psychologist Helen Haste, a visiting professor at the Harvard Graduate School of Education and part of Frankel’s “Picturing to Learn” team.

Think of the Hindenburg disaster, said Vinothan N. Manoharan, an assistant professor of chemical engineering and physics at Harvard. In the 1937 accident, a catastrophic fire consumed a hydrogen-filled rigid airship in just seconds.

Or the idea of hydrogen-fueled cars, said Logan S. McCarty ’96, Ph.D. ’07, assistant dean of Harvard College and a lecturer on chemistry and chemical biology. The problem, he said, has real-world value.

Both Manoharan and McCarty, on hand for the chemistry workshop, use “Picturing to Learn” assignments in the classroom.

As the three groups (A, B, and C) scattered for the assignment, Rosenberg offered a final reminder: Collaborate as a group of four, she said, “not as parallel pairs.”

In the future, Haste reflected, creative work in the sciences and other disciplines will break academic boundaries — and will break boundaries of expression too. Visual elements, for one, will increasingly support the traditional paradigm of text.

Group C headed for a sunny corner room on the fourth floor, where a long table, pens, and a stack of numbered paper awaited. A videographer stood to one side, her camera aimed.

By noon, the group had run through a novel’s worth of metaphors. To explain the calm, violence, and calm of hydrogen-oxygen pairing they considered riot, revolution, wind gusts, megaphones, and a raft blowing between two islands dubbed “Milk” and “Cookies.”

“You can very easily make this too childish,” said Jimenez, sparking a brief debate about emoticons and facial expressions. Maybe something with “a goatee or piercing,” offered Storus. That got nowhere.

Then another group sketch: wide boxes, faces, hands, dialogue balloons. How to express time? What will represent the spark? Ideas converge. Storus asked, “Do we want to prototype this?”

After a quick lunch, the group settled on an image of population dynamics: a crowd of faces expressing happiness, surprise, confusion, and fear. A brief chaos is animated by a “spark” (a shout over a megaphone). But in their postexplosion world, hydrogen and oxygen bonds combine into stable atomic pairs. They gaze at one another contentedly.

“We’re so responsive to faces,” McCarty observed later, when Group C — presenting last — displayed a final drawing on screen. Chaos segues into peaceful bonding, he said, and in the end “everyone is water. It’s a very effective idea.”

Group A settled on dominoes as an explanatory metaphor. But these are gases, not solids, observed Manoharan. True, said McCarty, but dominoes are “cool” for representing mechanical states.

Group B tried out crashing airplanes and sinking ships as metaphors, and even considered dominoes. But it was hard to figure out “how dominoes with hands can run up a hill, then recombine with each other,” said GSD student Dk Osseo-Asare. (The group settled on a crowd-and-hill image.)

In the end, Grinkrug liked the pairing of science and design students in pursuit of a suitable image. “It was refreshing,” she said. “It breaks boundaries.”