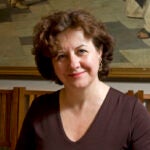 An attempt to define ‘academic excellence’

When housing prices on Main Street tumbled last year — who doesn’t know this? — tremors rumbled all the way to Wall Street, and beyond.

For the first time in 40 years of record-keeping, the median price of a single-family home declined. In six months, the value of U.S. housing stock dropped $3 trillion. Credit got tight; sales and housing starts slid.

Today, homeowners and cities alike are facing a decline in property values and a rise in energy costs.

What better time for action — maybe even innovation? That was the idea behind the Housing Cities Symposium 2009 last week (March 13) at Harvard’s Graduate School of Design (GSD).

On hand for a day of lectures and panels was an eclectic mix of experts in design, the law, real estate, public policy, public health, and sustainability. Student organizers from the GSD and the Massachusetts Institute of Technology (MIT) drew in 350 registrants.

Housing in crisis was the grist: rental housing, aging housing, green housing, and “mixed-income” housing (the kind that combines income levels in one setting).

The day began with a question so basic that it is seldom asked: Why does housing matter?

In his opening remarks, Nicolas Retsinas — as you might expect from the director of the Joint Center for Housing Studies of Harvard University — had a few answers.

Before the crisis, he said, Americans thought of housing as just shelter, as a financial safety net, or even as something just to buy and sell. Retsinas mentioned a survey of concerns for members of Congress just over a decade ago. Housing ranked 49 out of 50.

And housing matters for mental health, said Retsinas. Our sense of self and of family depends on where and how we live.

Still, “crises are too important to waste,” he said, and the housing shock could include “a modest market silver lining.”

Retsinas imagined a future in which foreclosed property is a new stock of affordable housing, for instance, and in which renting acquires the social value it had at the end of World War II. “Rent was not a four-letter word,” he said. “Owning [a home] should not be the only option.”

At any rate, the present crisis is an opportunity for designers, developers, and real estate experts, said Retsinas: “It’s the right business, it’s the right time.”

Richard Baron thinks so. He’s a veteran of more than three decades of for-profit urban developing, and founder of McCormack Baron Salazar in St. Louis, a firm that has brokered 124 projects in 33 cities.

Step back and look at the big picture, he said. Even before the crisis, developing new housing in cities suffered from a lack of coordination. Experts in building, job creation, schools, and federal building credits were not talking to one another. And often still don’t.

But “layered financing” for new and refurbished housing is more important than ever, said Baron. That means the need for collaborative deals between and among banks, philanthropies, developers, and governments.

With a new administration and an economic stimulus at hand, opportunities exist, said Baron. “There’s a lot of money floating around,” he said. “Get a shovel. Be ready.”

These opportunities include occasions to build sustainable housing, or refurbish old housing to green standards that save power and water. Energy, solar, and new-market credits, he said, are “floating around in the tax code.”

Green housing means innovation, but also means barriers. How the two fit together was the subject of an afternoon panel moderated by Cambridge architect Leland D. Cott, an adjunct professor of urban design at the GSD.

The dominant barrier to energy- and water-efficient housing is a lack of federal guidance, said panelist John Fernandez, an MIT architect.

Yet the need is great, he said: The built environment consumes 70 percent of U.S. electricity and accounts for up to 15 percent of water usage.

Cutting water and energy use in half can be done “quite easily” with off-the-shelf technology, said Edward F. Connelly, president of the Cambridge, Mass.-based New Ecology Inc. But present building codes are only strong enough “to keep you out of jail,” he said, not build good buildings.

There are other barriers, said Connelly: Risk-averse design teams and builders (who have to be “massively retrained,” he said); no metrics for measuring building efficiency (something his company is working on); scanty market incentives; and — in the bigger picture — no national energy policy.

“Someone’s got to be telling us how to behave,” remarked Cott, “because obviously we don’t know how to behave.”