An attempt to define ‘academic excellence’ 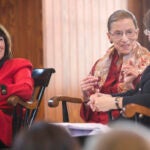 Harvard conference on gender and law looks at past, present, future

Many people talk about academic excellence — but who or what really defines this elusive quality?

Michèle Lamont, Robert I. Goldman Professor of European Studies and professor of sociology and of African and African American studies, analyzes the system of peer review in her new book “How Professors Think: Inside the Curious World of Academic Judgment” (Harvard University Press, 2009). By examining the process of scholarly evaluation, she also addresses larger questions about academia.

“In some ways studying peer evaluation and review is a point of entry into a much broader issue, which is the issue of meritocracy in American higher education,” says Lamont.

To research the book, Lamont interviewed panelists from research councils and societies of fellows who were evaluating proposals for research funding in the social sciences and the humanities.

Lamont explains that academics must constantly make evaluations, whether of scientific findings or of graduate students. Expertise, personal taste, and the perspective of the evaluator play into the decision-making process, she writes.

“A lot of what the book does is to look at what criteria people use to judge and what meaning they give to these criteria,” says Lamont. “So for instance, what do they mean by ‘significance’ and what do they mean by ‘originality’? How does the definition of ‘originality’ and ‘significance’ vary between philosophy and economics? How strong is the consensus between fields?”

Within the peer review system, Lamont explains, there are many spoken and unspoken rules. An expert must place integrity and objectivity above any personal interests, she says. Achievement is based on expertise, excellence, and originality, and not other more ephemeral characteristics, such as professional connections.

Yet, while a proposal would never receive funding based solely on connections, academics do inhabit strong social networks. Scholars are constantly evaluating one another, and being judged in turn.

Evaluation is subjective because it always occurs in context, says Lamont, with the definition of excellence varying from one discipline to another. Different tools are necessary, for example, to achieve excellence in English than in economics — and it’s impossible to look through the lens of one discipline to evaluate achievement in another, she says.

“Different disciplines shine under different lights,” says Lamont. “Their best contributions are not made with the same tools. I think that the beauty of a university is its intellectual diversity.”

Lamont, who serves as senior adviser for diversity and faculty development in the Faculty of Arts and Sciences, also finds that academics often combine criteria of diversity with criteria of excellence in their evaluation, but they are much more concerned with institutional and disciplinary diversity than they are with race, ethnicity, or gender. This is surprising given the amount of attention given to racial and gender diversity in national debates about higher education.

Lamont hopes to encourage self-reflection among academics through her analysis of this topic. For example, academics sometimes — consciously or unconsciously — prefer research that is similar to their own, she says.

The American peer review process is broadly viewed as the best possible system, says Lamont, although it is not without its critics. Nevertheless, many European governments are using the peer review system as it exists in the United States as a point of reference in their efforts to reform their own systems. This is only one reason why it is important to understand how this system works, beyond vague evocations of standards.

Lamont hopes her book will be of interest to graduate students who need to learn about the peer review process, but are not often taught about the system as part of their curriculum.

What’s most important, Lamont says, is that academics believe the system works, strengthening their personal investment and involvement in it. Scholars participate in peer review despite the fact that they often find themselves reading and evaluating proposals during their own time, in the evenings or on the weekends.

“It’s part of the honor, as an expert, that they ask you to do this,” says Lamont.