Panels contrive job interview for the next president of the U.S. 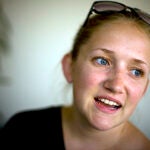 If the presidency of the United States were a job one applied for like a job in the business world, what questions should be included in the interview?

That question was one of the provocative ideas behind the all-day “Conversation on Leadership and the Next Presidency” presented Monday (May 12) at the Charles Hotel by the Center for Public Leadership at the Harvard Kennedy School (HKS).

The program, presented in association with the Ken Blanchard Companies and the Charles Hotel, brought together more than 200 leaders from the public and private sectors as well as academia and the media.

It was an effort to push the political discourse of the country beyond sound bites. Not only did participants hear panel discussions from a variety of experts from across Harvard University and elsewhere, but they got an opportunity to “vote” on a slate of proposed questions for the presidential candidates, as well as to formulate their own questions.

The top five questions all got 77 percent support from voting conferees; the very top question was: “Can you share some examples of when you were a catalyst who brought groups with polarized opinions together so that all voices were at the table?”

Throughout the day, the call was for “authentic leadership,” for leaders who can admit mistakes and learn from them, as, for example, President Kennedy learned from the Bay of Pigs.

Rosabeth Moss Kanter, the Ernest L. Arbuckle Professor of Business Administration at Harvard Business School, called for action to reverse what she called the country’s “losing streak.” She called for accountability — “a leader who puts facts on the table and doesn’t oversimplify.” As an example of a leader able to engage citizens with complex ideas, she cited Nelson Mandela of South Africa, who was able to convene a national conversation to draft a new national constitution.

She called for collaboration and inclusiveness: “Bifurcated thinking is a characteristic of a downward spiral,” she said. “If it’s only ‘for us or against us,’ you invite defeat.” She invoked what she called the “change agent’s rule of thirds: some people with you, some people against you, and some in the middle whom you can talk to,” and suggested that leaders look to see “what little things can be done to bring the middle along.” A survey of women in Afghanistan, she noted, found them most interested not in “big issues” such as health care and education but “smaller” ones like garbage collection.

Kanter also saw a need for the country to regain a sense of initiative and activity, as distinct from the “learned helplessness” that is part of the downward spiral.

Patrick Lencioni, founder and president of the Table Group, a consulting group, stressed the importance to a presidential hopeful of a capacity for teamwork — the kind of teamwork that’s not visible on the campaign trail. A president needs to be able to sit down with a small group of close advisers and get a lot of things done in a hurry, he said.

Lencioni stressed the value of a leader with “a distaste for ego and a passion for results,” and he cited corporate guru Jim Collins on charisma: “It’s OK for the leader to have charisma as long as he understands the disadvantage he’s at.”

Other qualities Lencioni stressed were humility, or vulnerability: “the ability to admit mistakes, apologize, ask for help — it’s tempting to want to fake this.” A leader needs to be free from fear of conflict, and willing to hold people accountable not only for their results but for their behavior — the way they treat their staff, for instance.

Barbara Kellerman, the James MacGregor Burns Lecturer in Public Leadership at the Harvard Kennedy School, stressed the challenge of leadership in America. America’s is a profoundly “anti-leader” culture, she said, in which the core values are equality, liberty, individualism, constitutionalism, and democracy.

The difference between cognitive and emotional intelligence was illustrated by failures of presidents from both parties: the resignation of Richard Nixon, described by his aide Bryce Harlow as an “ambulatory computer,” whose insecurities not only led him to commit the abuses of power that brought him down, but to tape them; and the impeachment of Bill Clinton, the Rhodes scholar who became sexually involved with a 22-year-old White House intern.

Panelists tackled the tough question of how a leader changes his mind, something the public seems to hold against leaders. Lencioni distinguished between changing a position and “waffling,” and said the public is “far more understanding” of leaders who change their minds in light of new information and can explain themselves. Other panelists were not so sure about Lencioni’s assessment. Kellerman observed that changing a position is something a leader “can’t do too often.”

Ken Blanchard spoke of “servant leadership,” a term associated with the work of the late author Robert Greenleaf — which is not, management consultant Blanchard was quick to insist, a religious concept. He called for a vision of the relationship between the president and the public that would “turn the pyramid upside down so that the president serves us.”

The importance of the vice presidential nominee came up in many contexts during the session. Speakers supported the value of nominees who would “balance the ticket” and be ready to take over immediately if necessary. And David Gergen, director of the Center for Public Leadership, gave his suggestion for the Democratic vice presidential nominee: former Sen. Sam Nunn of Georgia.

QUESTIONS FOR ‘THEIR PRESIDENT’

Here are the top five questions for a presidential candidate, as chosen by the participants in Monday’s leadership conference:

1. Can you share some examples of when you were a catalyst who brought groups with polarized opinions together so that all voices were at the table?

2. Tell us about a high-performing team that you’ve built. What are the most important principles you’d follow in governing and leading your senior White House team?

3. In the past, how have you responded to, evaluated, and learned from mistakes — your own and those of your team?

4. The United States ranks first in incarceration and 18th in high school graduation. What leadership skills do you bring to the challenge of reversing these numbers?

5. What are your five core values and how do they shape how you lead?