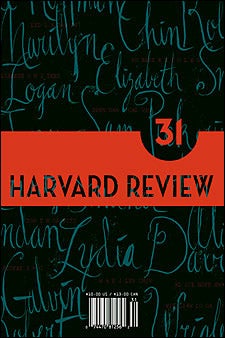 Harvard Review has garnered recent recognition for both its writing and art design: Two pieces published in the literary journal have been selected for inclusion in The Best American series – a showcase for the year’s poetry, short stories, and essays since 1915 – while two of the journal’s covers have been chosen for Print magazine’s 2006 Regional Design Annual.

In this, the fifth consecutive year that at least one piece from the Review has earned a spot in Best American, the selections include both a short story and a poem. The former is “Theft” by Karen E. Bender, chosen for the 2006 edition of “The Best American Mystery Stories” (Houghton Mifflin) by guest editor Scott Turow, a novelist and attorney. “Theft” tells the story of an aging swindler, slowly being robbed of her identity by Alzheimer’s as she determinedly heads off on an Alaskan cruise. Bender has been published in the Iowa Review, the Kenyon Review, The New Yorker, Granta, and Story magazines. Her work has been reprinted in the “Pushcart Prize XVIII” and the 1997 edition of “The Best American Short Stories,” and she is a graduate of the Iowa Writers’ Workshop. Bender’s story originally appeared in Harvard Review 29 (fall 2005).

From that same issue comes the poem “The Ferry” by Katia Kapovich, chosen for “The Best American Poetry 2006” (Scribner) by guest editor and former Poet Laureate Billy Collins. Moldova-born Kapovich, a bilingual poet who writes in English and Russian, lives locally in Cambridge, Mass. She is the author of the book of poems “Gogol in Rome,” and her poetry has also appeared in Ploughshares, the London Review of Books, Antioch Review, the American Scholar, the Massachusetts Review, Press, Slate, Salamander, the Dark Horse, Verse, and Stand. She is co-editor of Fulcrum, an annual “of poetry and aesthetics,” with her husband, poet Philip Nikolayev, and was selected as a 2002 Witter Bynner Fellow by the Witter Bynner Foundation in conjunction with the Library of Congress.

The new issue of Harvard Review is now available and contains fiction by Alice Hoffman, Alan Heathcock, and New Zealand novelist and former poet laureate Elizabeth Smither, as well as essays by Tony Horwitz and Sam Pickering, and poetry by Brendan Galvin and Marilyn Chin. Harvard Review is published twice yearly, in spring and fall, and subscription information can be found at http://hcl.harvard.edu/harvardreview. The journal can also be purchased for $10 from the Harvard Coop, the Harvard Book Store, or directly from the Harvard Review office in Lamont Library.

For Print magazine’s Regional Design Annual, Harvard Review won note for the covers of issues 28 and 29, published in spring and fall 2005 and designed by Alex Camlin, art director for Da Capo Books (part of the Perseus Group). The graphic design award, which aims to recognize the best design, illustration, and photography being produced in the United States, culled winners from 20,000 individual entries. Print will feature winning selections in its November/December 2006 issue.