Making a commitment to freedom of thought 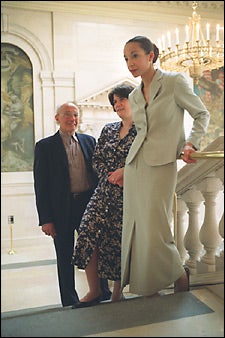 Being an outstanding teacher requires talent, inspiration, experience, dedication, and hard work – a challenge for anyone, but a particularly daunting one for those who are also expected to stay on top of a complex and rapidly advancing field of knowledge and to make regular contributions to that field in the form of books and articles.

For professors at top universities, such multitasking is par for the course, and a few even manage to perform at a high level in all three areas. Each year, Harvard recognizes professors who not only shine as researchers and writers but exceed expectations in teaching as well.

The Harvard College Professorships are among the ways Harvard rewards excellence in teaching. The appointments are for a five-year term and provide support for professional development, either in the form of research funding, a semester of paid leave, or summer salary. The 24 Harvard College Professorships were established in 1997; half of them derived from the gift of John and Frances Loeb.

These professors talked recently about their philosophy of teaching, how they balance teaching and research, and how they expect the awards to affect their lives.

“It’s hard to imagine a greater honor from the University,” said Fisher. “I love teaching and have cared a lot about it. With this award the University acknowledges a side of our work that I myself consider most important.”

Most of Fisher’s undergraduate teaching is on 19th and 20th century fiction. He believes students should have a grounding in the great works of literature, and both his reading lists and teaching technique reflect this idea.

“My courses are designed around books that I can present as major experiences, not because they exemplify something, but because they are absolute works of art, among the great objects of civilization.”

Fisher believes that after students acquire a grounding in the great works of the canon, they will be equipped to move on in other directions.

“This is the ground of a good education. Education enables many paths after that.”

Dean of the Faculty of Arts and Sciences and Edith and Benjamin Geisinger Professor of History William C. Kirby said, “Philip Fisher writes with equal facility and erudition about wonder, passion, aesthetics, and broad-ranging literary and cultural histories of America. His students praise his enthusiasm and originality. With no wonder, but plenty of passion, I am pleased to name him a Harvard College Professor.”

Georgi said that much of the enthusiasm he feels for teaching comes from his experience as an undergraduate at Harvard in the mid-1960s.

“Harvard changed my life in many wonderful ways. I love teaching because I love the students and hope to pass on some of the excitement that I found at Harvard myself.”

Georgi said that as a House Master (Leverett House) and as head tutor in the Physics Department, he has become deeply connected with the undergraduate program and has chosen to teach beginning courses for concentrators.

“I still find that teaching stimulates ideas that are useful in research,” he said. “For example, a paper I wrote last summer is closely related to a sophomore course, Physics 15c, that I have taught many times.”

Georgi said that he has not yet decided how he plans to use the professional development aspect of the award, but he doubts whether he will take a leave of absence.

Kirby said of Georgi: “For nearly four decades, Howard Georgi has grown with Harvard itself, from his early days as an undergraduate, to his membership in the Society of Fellows, to his rising through the faculty ranks, chairing the Physics Department, and serving as master of Leverett House. He has done pioneering work in theoretical particle physics, yet he remains beloved and accessible to the newest students in his classes. (According to the CUE Guide, they especially like his ‘late-night office hours in Leverett the evening before problem sets are due.’) As a scholar and a teacher, Professor Georgi epitomizes the Harvard College Professor.”

Gilbert said that for most college professors, teaching is an important duty, but a duty nonetheless. At Harvard, however, the quality of the students makes teaching a delight.

“Harvard students are unbelievably special,” he said. “They’re extremely smart – that goes without saying. But they also have an extremely high level of engagement. I rarely leave a lecture feeling less enthusiastic about a subject than when I began.”

Gilbert said that the interest evinced by students in a subject helps him to remain excited about the material and often renews his interest in topics he has covered many times.

Gilbert said that he was delighted to be named to a Harvard College Professorship because it confirmed the emphasis he has always placed on teaching.

“I dedicate a great deal of energy to teaching and to working with my students on their research. It is nice to have that effort recognized.”

Of Gilbert’s pedagogical distinction, Kirby said: “Professor Gilbert’s work on affective forecasting tells us that we often wrongly predict our emotional reactions to an event. I’m delighted to say I predicted correctly: With great pleasure, I congratulate Professor Gilbert on his distinguished career in teaching and research. An astonishing number of his students describe him as one of the best professors they ever had. He brings humor, energy, and deep knowledge to his explanations of how people truly experience the lives they live.”

Like her colleagues, Hoxby appreciated being recognized for the effort she puts into teaching.

“I dedicate a great deal of energy to teaching and to working with my students on their research. It is nice to have effort recognized.”

She was also enthusiastic about the intellectual quality of the students she teaches.

“At Harvard, we are privileged to have the best students in the world,” she said. “They enjoy being challenged, and they set themselves no limits on what they should be able to do.”

An economist known for her groundbreaking research on education, Hoxby said that her research and teaching are often closely connected.

“I teach students how to do research on education, particularly the evaluation of educational policies. Students in my class conduct truly original research projects, many of which produce the best existing research on a topic. Their studies are compiled in a research volume that is used by other students and to which I often refer myself,” she said.

Kirby said of Hoxby’s performance, “Professor Hoxby brings a laserlike intellect to her study of labor economics, public economics, and the economics of education. She has done landmark work on school choice, among other issues, and she carries exceptional clarity of thought from her research to the classroom. I am honored to name her a Harvard College Professor.”

Pertile, a professor of Italian literature, said that he was “totally bowled over” by the award, “and rather moved as well. There are so many colleagues who are devoted teachers and I feel very honored to have been singled out for this recognition.”

Pertile teaches a core course on Dante and said that he is often inspired by his students’ initial encounters with “The Divine Comedy.”

“Every year there is a group of students who approach Dante’s great poem for the first time and are inspired by it, even beyond their own expectations. I don’t mean just students of literature and the humanities in general, but biologists, mathematicians, physicists, and other scientists. It’s a wonderful opportunity, and a privilege for me, to be their guide for a while, and it’s amazing how much I learn from them each year.”

Pertile said that his teaching and research are often closely connected, one feeding into the other and vice versa.

“A book of mine on Dante which is due out any day now is largely based on ideas that I either developed in my lectures or that came to me while conversing with my students. Learning while teaching is perhaps the most exciting and rewarding aspect of our work.”

Kirby had this to say about Pertile’s accomplishment: “Professor Pertile brings what his students call ‘unbridled enthusiasm’ to his study of some of the world’s oldest, greatest texts. He has led countless students through the rings of Dante’s Hell, through Purgatory, into Paradise. He is equally versed in the contemporary Italian novel. I abandoned all hope of choosing others: Congratulations to Professor Pertile on this new, signal honor.”

Seltzer said that she was “pleasantly surprised and flattered” on hearing that she had received the award.

As a computer scientist, Seltzer is adamant about the nourishing connection between teaching and research.

“All too often, universities are criticized for being too focused on research, but it is the active involvement in research that helps good teachers become great educators.”

Seltzer said that practically everything she teaches in the classroom is informed by her research activities.

“By bringing research into the classroom, one can transform the teaching experience from simply conveying information to students to making them a part of the enterprise of creating knowledge. At Harvard in particular, it is enormously rewarding and satisfying to watch this happen right before one’s eyes.”

Seltzer said that she will use the award to help fund her research, which in her case means supporting graduate students, who will, in turn, mentor undergraduates.

Kirby said of Seltzer: “Professor Seltzer, in short, makes it possible for all of us to efficiently use our computers. Her innovative work in software systems helps users do more, with increasingly challenging applications. She brings this extraordinary expertise to her administrative work at Harvard. For achieving so much, in research, in the classroom, and throughout the University, I can think of no more deserving Harvard College Professor.”