From cow-dung hut to Harvard: 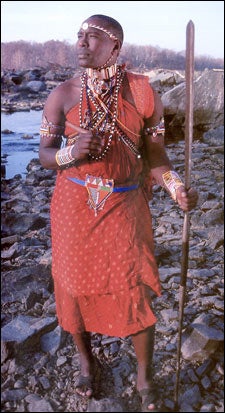 When Joseph Lemasolai Lekuton receives the M.Ed. degree today from Harvard’s Graduate School of Education (GSE), he’ll be one of the few graduates whose parents are not proud.

“My mother has no idea what Harvard is,” he says. “Other people enjoy my success coming to Harvard, and she has no idea. My whole family cannot comprehend what’s going on. They don’t even know what school is.”

As Lekuton celebrates the completion of a Harvard education, his mother and brothers will be half a world away, in a cow-dung hut in rural Kenya. Shortly after Commencement, Lekuton will join his family to help herd cattle.

“No laptops, no phone, just my spear and my club and my red cloth,” he says, describing his traditional dress.

Raised in a remote Maasai village in northern Kenya, Lekuton is a nomad to the core, traveling eagerly between wildly different cultures.

In Cambridge, he has lived in graduate student housing, dressed in crisp khakis and an oxford-cloth shirt, carried a briefcase and cell phone, and pursued academics with zeal. In Kenya, he will don a red robe, drink cow’s blood mixed with milk in his mother’s hut, and admire his brothers’ skill with cattle.

Lekuton hopes that his GSE degree in international education will help him knit his cultural experiences together to benefit his native Kenya. Western education and tribal life have much to offer each other, he believes, and he’s in a unique position to link the two.

To describe Lekuton’s life story as “remarkable” is to understate it dramatically. He’s not sure exactly when or where it began: As nomads, the people of his village relocated as weather and grazing conditions changed. And the Maasai don’t measure age by the date of one’s birth.

The youngest of three boys, Lekuton is of the Ariaal, a subgroup of the Maasai. His culture is a traditional tribal one in which cattle are king, lions and hyenas pose genuine threats, village resources are shared communally, and the passing of time is punctuated by weather and rituals rather than clocks or calendars.

In this nonliterate society that speaks only Maa, Lekuton’s education was an accident. He recalls soldiers from the Kenyan government coming to his village to demand that each family send one son to a nearby missionary school. His second-oldest brother was tapped, but he so hated the school that he hid in a hyena’s den for days to avoid returning.

So Lemasolai – Joseph is the name given to him by American missionaries – went in his brother’s place. He boarded at the school and returned to his village every three months, sometimes walking up to 50 miles to find his way home to what was, after all, a moving target.

At first, education was a novelty, and writing his name for the boys in the village was little more than a party trick. Yet Lekuton soon saw that the missionaries could cure diseases and draw water, skills even the chubby young warrior valued. And by coming home every three months, Lekuton never had to forfeit his tribal life.

“That’s what motivated me, that I could do both. I could be a cattle herder, I could go through all the initiation ceremonies in the village, I could do anything that the other kids could do, but I could also do other things they couldn’t do,” he says.

A strong student, Lekuton was admitted to a preparatory school sponsored by then-President Daniel arap Moi in the city of Nakuru. Arriving barefoot and tattered in a cattle truck, Lekuton was stunned at the Volvos and Mercedes-Benzes snaking through the school’s manicured grounds to deposit his fellow students.

“When the gates to the school opened, I could just see the future being bright,” he says.

Solving problems of the village and the world

While he excelled at academics, it was Lekuton’s soccer skills that caught the attention of President Moi, who lived nearby. Drought and famine were plaguing Lekuton’s village, and cattle – the currency by which his tuition was paid – were dying. After leading his soccer team to victory against a rival school, Lekuton was invited to a private meeting with Moi, who pledged to help his village and pay his school fees.

Moi also facilitated a bank job for Lekuton after he finished school. There, he changed money for an American man who was recruiting African students for a scholarship program at St. Lawrence University in upstate New York. In 1989, with interviews, achievement and English tests, and hundreds of rugged miles behind him, Lekuton boarded a plane in Nairobi for America. St. Lawrence granted him a full scholarship; his village raised and sold as many cows as they could to buy his ticket.

After college, Lekuton stepped to the other side of the desk and became a teacher at the Langley School in McLean, Va., to which he will return next fall. He’s regularly brought groups of Langley students and parents home to Kenya with him to encourage cross-cultural learning and support.

“They’ve been very good to me,” he says of Langley, which helped with his Harvard tuition. “They made me a lot of the things that I am today.” Langley families have established a scholarship for other Maasai children in his name through the Nomadic Kenyan Children’s Education Fund.

Learning skills like negotiation, statistics, and Western political philosophy at Harvard will, he hopes, help him one day step into a leadership role in Kenya.

While his American education brings obvious advantages to his village, which now has running water and educational advantages provided by the scholarship, Lekuton says his tribal experience is equally valuable in preparing him to make a difference in his native Kenya.

“The whole world is becoming small. The problems of the village will very soon be the problems the rest of the world is facing,” he says.

Chosen to speak at last night’s pre-Commencement ceremony at the GSE, Lekuton shared the story of his wild ride from Kenya to Harvard. In his cheering section were, among others, a mentor and benefactor from Virginia, AmeriChoice President and CEO Anthony Welters, and Kenya’s ambassador to the United States, Yusuf Abdulrahman Nzibo; both men will attend today’s Commencement ceremonies as well.

Like the nomadic villagers, who can pack their few belongings and change location at a moment’s notice, Lekuton relishes his cultural fluidity, cherishing his life as a Maasai cattle herder every bit as much as his American academic life.

In the book he’s written to help middle school students understand his culture (“Facing the Lion,” National Geographic Press, 2003), in the ceremonial robes he will wear beneath his cap and gown, in gratitude he expresses for his uneducated mother’s support and encouragement, Lekuton’s pride in his Maasai heritage beams bright.

“I’m not afraid to say that my mom lives in a cow-dung hut. She is so poor, but she is rich in that hut,” he says. “She has so much information in that brain that she gave me a priceless education that even a Harvard professor can’t give me.”