Liaison to the community — McCready to oversee relations with Cambridge 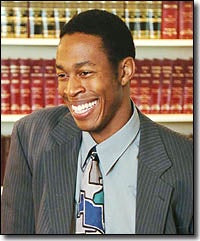 Travis McCready is the new director of community relations for Cambridge in the Office of Government and Community Affairs. Staff photo by Rose Lincoln. FONT>

As a non-profit lawyer in Minneapolis, Travis McCready managed his share of difficult negotiations.

Working for the firm of Fredrikson & Byron, he negotiated mergers and acquisitions and commercial contracts, and represented various non-profit clients. For four years, he also represented the local branch of the NAACP in a long, complicated, and often acrimonious fair housing and urban redevelopment lawsuit.

“It got ugly sometimes,” he said, “but all in all it was a tremendous learning experience.”

Now McCready plans to bring the savvy he acquired during his work in Minneapolis to his new job as director of community relations for Cambridge. But he will also bring something more  a deep-seated commitment to making the benefits of higher education accessible to all.

McCreadys commitment was inspired by personal experience. Raised in Brooklyn until the age of 13 when he moved with his mother and three brothers to Harlem, McCready spent his elementary and high school years at St. Anns, a private school in Brooklyn Heights. He went from there to Yale, where he majored in philosophy and played varsity basketball.

After earning his bachelors degree, he taught 5th grade at a public school in the Bronx, an experience he describes as “absolutely fantastic. I found that, once reached, the kids had a real passion for learning.”

Although McCreadys tenure at the school lasted only two years, teaching made a deep impression on his mind and heart, one that would exert an influence on his future career path.

“My experience teaching set the stage for me for the rest of my life,” he said.

But it would be some time before McCready once again placed his knowledge and skills at the service of education. First would come a detour  albeit a necessary and rewarding one  into the study of law.

At the age of 23, McCready entered the University of Iowa Law School in Iowa City. He not only earned a law degree but also met his future wife Tanya, now also a lawyer. After graduation, McCready accepted a position with Fredrikson & Byron, with whom he had interned as a law student.

Asked how he went from lawyering in Minneapolis to managing community relations in Cambridge, McCready paused, shook his head, and laughed.

“Believe it or not, I applied online.”

Feeling dissatisfied with corporate lawyering, McCready, on a whim, visited one of the major job search websites. He typed in the criteria of what he envisioned to be his ideal job, and up popped the Harvard position, the one he now holds.

“For me, providing community legal service was the most enjoyable part of being a lawyer. I was truly intrigued with the idea of using what I had learned in another venue, particularly since Harvard has so much to offer.”

McCready was offered the job after a lengthy search and interview process, involving more than 100 highly qualified applicants. His new colleagues are pleased that his decision to try his luck with the Internet brought him to Harvard.

“We are delighted that the search led us to Travis,” said Mary Power, senior director of community relations. “He brings professional experience coupled with interpersonal qualities that are uniquely suited to the challenges of the post.”

Power went on to praise McCreadys “long-standing commitment to community involvement and his appreciation for the importance of building relationships, one at a time, to create an environment defined by partnership.”

McCready sees much of his job falling under the rubric of community outreach and looks forward to working with and joining the community at all levels.

Although he is a newcomer to Cambridge and realizes he has a lot to learn about the community, McCready feels that his fresh perspectives might be an advantage.

“Professors in law school were fond of using the expression not seeing the forest for the trees. I think that sometimes theres a clarity that people who are new to a situation can offer. Thats the kind of perspective I hope to bring.”

He also looks forward to engaging with a community that he believes is rich in civic virtues.

“There are elements of Cambridge life that are unlike any community of which I am aware. There seems to be intelligent dialogue conducted for the most part in a respectful manner. And people seem to have a great deal of information at their disposal.”

McCready looks forward to settling in Cambridge with his wife and their six-month-old daughter Kaija. Although he has given up basketball, McCready continues to engage in athletics, competing in long distance running and triathlons.